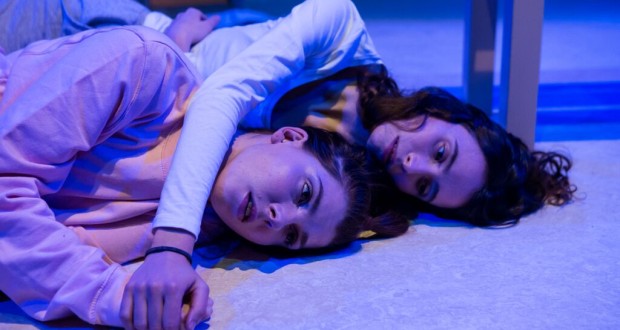 Pros: Vibrant language and vivid characters bring a rarely seen world powerfully to life. Cons: If talking about women’s ‘issues’ make you uncomfortable, be prepared to squirm. I feel weird about looking. My heart quickens when I realise that, yes, they really are going to dramatise a crucial scene. At a critical moment, another audience member’s head obscures my view, forcing me to shift position, but I’m not comfortable. I’m a seasoned theatre-goer and feminist, yet even I feel conflicted. Should I want to look at this? A middle-age woman nearby decides at this exact moment to flick through her&hellip;

A heart-wrenching, funny and important play which is enhanced by this excellent production.

I feel weird about looking. My heart quickens when I realise that, yes, they really are going to dramatise a crucial scene. At a critical moment, another audience member’s head obscures my view, forcing me to shift position, but I’m not comfortable. I’m a seasoned theatre-goer and feminist, yet even I feel conflicted. Should I want to look at this? A middle-age woman nearby decides at this exact moment to flick through her programme – in the dark.

You’ve probably grown up with the American high school drama through film and television: the vapid, back-stabbing, credit-card abusing, over-sexualised prom queen is as familiar to us as it is alien to most British people’s experiences of the education system.

We start with the main tropes. A row of lockers, shorthand for school in America, line the back of the stage. The girls are shrieky and laconic and, in their way, witty. But what they say, well, that’s something completely different. This is no Gossip Girl.

Dry Land, written by Ruby Rae Spielgel when she was just 21, wowed critics and the public when it opened off Broadway. That was last year. This year, the playwright is a whopping 22. In many ways the play is almost inconceivably mature for a writer of such tender years, yet at the same time it’s spiky, poetic language feels as though it gushes up from a well of aching authenticity that could only come from one so recently there.

“Punch me,’ says Amy (Milly Thomas) to Ester (Aisha Fabienne Ross), as they sit on the locker room benches. She does, repeatedly. Amy, the self-aware high school slut, is pregnant. With no money, no ID and no-one else to turn to, this is her chosen option. Or maybe she’ll drink detergent; or throw herself down the stairs. They talk as Ester lands harder and harder punches, and we head into a tender, traumatic, fearless and funny exploration of adolescence, ambition, the female body, friendship and first love. Meanwhile the realities and financial constraints of a small-town existence hang in the air. No credit cards here.

The dazzling writing raises Dry Land high above the plain of moralising issue-based drama: it’s a vivid world that is real and familiar to so many women and girls who still, even in this day and age, do much of the learning about their own bodies in the playground. It’s a world so familiar to half of the population, and yet alien as a subject for stage, screen or, even, conversation – as recent political debates attest.

It’s clear the magnificent cast relish the language and power of the story they’ve been given to tell, and they respond by bringing these girls vividly to life in a way that feels authentic and familiar. Director Hannah Hauer-King gives them the space they need to explore the sparkling language and wonderful characters and, as a result, Dry Land hits a pitch-perfect note. It’s a worldview all of its own. It’s not out to deliberately shock, it just tells a story that needs to be told. It feels like a whistling kettle finally coming to the boil – it’s a relief that these stories have erupted organically from inside Ruby Rae Spielgel.

This is what happens. We just don’t talk about it. Like the ambivalent janitor who provides the play’s full stop, we sweep it up and pretend it doesn’t happen. Which is all the more reason to take a long, hard unflinching look. And, as we poke our heads back out into the elegant, self-consciously upper class street in which the Jermyn Street Theatre incongruously sits, maybe those who are keenest to look away should take the longest look of all.