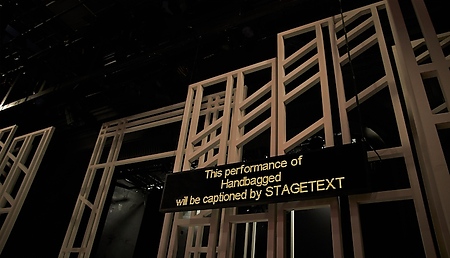 Author: Everything Theatre in Features and Interviews 5 November 2015 0 756 Views

15 years ago this month, three theatregoers with different types of deafness met up in London with a group of deaf and hard of hearing theatregoers from the Theatre Development Fund in New York. They were interested to see a new technology in action that the American visitors had brought with them from Broadway. That technology was captioning, explains Melanie Sharpe, Chief Executive of Stagetext.

What was demonstrated that night, at an RSC production of Antony and Cleopatra at the Barbican Theatre, was a system whereby the words of the actors would appear on a screen above or near the stage, at the same time as they were being spoken. At a time when many deaf and hard of hearing theatregoers would read the script with a torch at the back of the theatre, or not access theatre at all, this new technology would see a step change for deaf, deafened and hard of hearing theatregoers around the UK.

The company now captions over 300 theatre performances a year

Skip forward to November 2015 and Stagetext is set to celebrate its 15 year anniversary. The company now captions over 300 theatre performances a year around the UK, supports many more theatres to caption their own productions and just this week, saw the first captioned cinema encore screenings of NT Live. A perfect time then to raise the profile of captioning even further, with the first Captioning Awareness Week.

If you haven’t seen a captioned performance, you might not know that theatre captions are similar to television subtitles. The actors’ words appear on a screen (or screens), placed next to the stage or in the set, at the same time as they are spoken or sung. Unlike opera surtitles, captions include additional information such as speaker names, sound effects and offstage noises. It’s a great service for those who are deaf and hard of hearing, as well as those who might not hear as well as they used to, or in venues where the acoustics are not the best. You can find out if your favourite theatre offers captioning by visiting the What’s on section of Stagetext’s website, where performances are listed year round.

Many people could benefit from captioning….but some of them simply don’t know the service exists.

For Captioning Awareness Week, Stagetext are aiming to bring together cultural venues and caption users from all over the country, to celebrate and raise awareness of captioning. We want as many people as possible to get involved, including those who might not have tried captioning and live subtitles before. So why are we doing this? There are an estimated 10 million people in the UK who are deaf, deafened or hard of hearing – that’s 1 in 6 of us, and it’s set to increase to 14 million by 2030. Many people could benefit from captioning, and have a much better theatrical experience, but some of them simply don’t know the service exists.

You can join Stagetext in celebrating their 15th anniversary by helping to spread the word about captioning throughout Captioning Awareness Week 2015, which runs from 9-15 November. There are captioned shows and live subtitled events on during the week and, in partnership with Digital Theatre, Stagetext are also holding an online Watch-along of Into the Woods. Alternatively you can join their selfie campaign and tweet a picture of yourself with the words ‘I’m #CAPaware’ or ‘I’m supporting Captioning Awareness Week’ using #CAPaware.

You can find more information on captioned shows or events with live subtitles at www.stagetext.org, or by emailing enquiries@stagetext.org. Captioned performances and live subtitled talks during the week include:

9 November 7.30pm Farinelli and the King at the Duke of York’s Theatre

10 November 7.30pm A Wolf in Snakeskin Shoes at the Tricycle Theatre

11 November 7.30pm Digital Theatre Watch-a-long of Into the Woods

12 November 1.30pm Curator’s Introduction to Celts: art and identity at the British Museum

13 November 7.15pm First Love is the Revolution at Soho Theatre

13 November 7.30pm Anita and Me at Theatre Royal Stratford East

13 November 7.30pm Talk on the Ai Weiwei exhibition at the Royal Academy of Arts

14 November 3pm Lord of the Flies at Sheffield Theatres