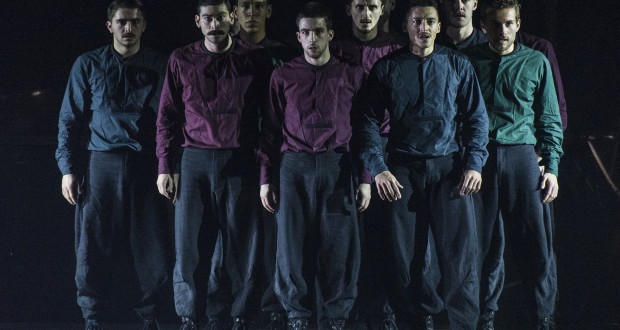 A stellar production of modern dance with some hard hitting themes and an exquisite score.

If truth be told I’m not a fan of modern dance. I’m a more literal spectator, that’s prone to a show tune or two, so have always struggled with the lack of narrative when it comes to people just jumping up and down on an empty stage. I’m glad to say this extremely naive view of modern dance has now been completely changed and I’m now a fully fledged modern dance convert thanks to the remarkable production from BalletBoyz called Young Men.

Following its hugely successful sell-out run at Sadler’s Wells in January, Young Men is back for one week only and is an absolute must see. The show is an intensely moving portrayal of love, loss and survival set against the backdrop of war.  As soon as the lights go out and the curtain slowly rises, its compelling stuff.  Produced by BalletBoyz artistic directors Michael Nunn and William Trevit and co-commsioned by Sadler’s Wells and 14-18 NOW, the WW1 Centenary Arts Commissions, Young Men is split into 10 different aspects of war and the impact it has on those that go and indeed those that are left behind. Through a series of dance movements that literally took my breath away, the cast, comprising of 10 strong and agile male dancers, weave a story around themes like Aftermath, Training A Soldier, Nightmares, Battlefield Landscape and Gas. The sheer power and emotion exuded from these dancers’ bodies is relentless and goose-bump inducing. All 10 dancers are on stage for most of the time, so it’s hard to reference individual dancers, but they all work well together as a steadfast and tight unit. Their focus is like nothing I’ve seen before. These Boyz are incredible. A special shout out must be made to Andrea Carrucciu, whose solo Shell Shock scene, while dressed in just his pants, was mesmerising. Carrucci’s lean body moved broken across the stage and with each step, while contorting into all sorts of positions, and you could see the horrors of war etched into his face.

Young Men is the first time BalletBoyz have ever included females within its cast. Having both Oxana Panchenko and Jennifer White amongst the men helps create a deeper and more heartfelt narrative, as they portray the sister or lover left behind, the sad and heartbroken mother or lost wife. The final scene Homecoming saw the two girls carry, hold, caress and nurture a weak and broken soldier and it was so beautifully executed: I was a big blubbing mess by the end of it. There are two main heroes of this piece, choreographer Iván Pérez and composer Keaton Henson. These two incredible talents have created a show unlike any other which is dark, unsettling and fraught with emotion. BalletBoyz had never intended to create a work about war, but as Pérez and Henson improvised in the studio with the cast the ideas and themes were impossible to ignore and this resonates on stage as each scene is flawless and captivating. Henson’s score is spine tingling and, combined with Pérez’s fervent and ingenious choreography, you are taken on a journey that will stay with you for the rest of your life.

Be it reflecting back across the last 100 years or looking at current crises, war will sadly be forever in our lives and, through sheer power of emotion and movement, Young Men makes you think and feel about what it must be like both now and then. I urge you to go see this masterpiece.