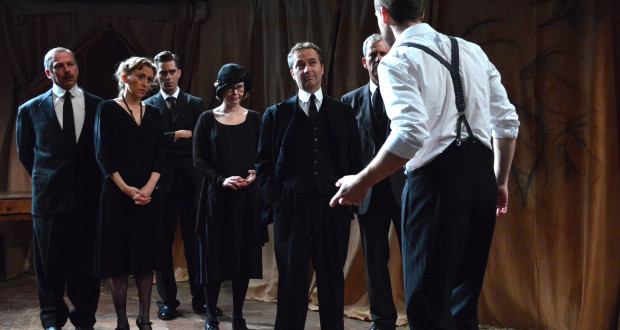 Cons: The script can drag on a little sometimes.
The First Man, Jermyn Street Theatre – Review

Pros: Great performances, set and lighting design. Cons: The script can drag on a little sometimes. The Jermyn Street Theatre is a wonderfully cosy venue hidden around the corner from Piccadilly Circus. The theatre used to be a restaurant cloakroom, and as such, space is limited, but is used incredibly effectively: the bar is within the auditorium itself, and anyone wanting to use the toilets needs to cross the stage itself to reach them. Rather than feel cramped, Jermyn Street Theatre manages to feel spacious and welcoming, not least thanks to its smiley staff. This production of The First&hellip;

A well-executed and well-delivered production in a cosy and welcoming little venue.

User Rating: Be the first one !
The Jermyn Street Theatre is a wonderfully cosy venue hidden around the corner from Piccadilly Circus. The theatre used to be a restaurant cloakroom, and as such, space is limited, but is used incredibly effectively: the bar is within the auditorium itself, and anyone wanting to use the toilets needs to cross the stage itself to reach them. Rather than feel cramped, Jermyn Street Theatre manages to feel spacious and welcoming, not least thanks to its smiley staff.

This production of The First Man is the UK premiere of a neglected play by Nobel Laureate Eugene O’Neill. Curt and Martha are a couple approaching their forties who have just returned home after taking part in a series of anthropological and archaeological expeditions around the world. They are both scarred by a terrible event which took place in their past: their two young daughters died of pneumonia many years ago. They vowed to preserve the memory of these children and never conceive again. However, as Curt reveals his plans to join a 5-year expedition to China to search for evidence of ‘the first man’, a missing link between ape and human, Martha reveals that she longs to be a mother again and is two months pregnant. As if the tension between the couple is not enough, Curt’s reputation-obsessed family hound Martha because of a suspicion that Curt’s best friend Bigelow may have fathered the child. They are desperate to avoid a scandal, regardless of the wellbeing of Curt and Martha.

The play takes place in Curt and Martha’s home. However, the stage is decorated by a backdrop painted in the style of ancient cave drawings. The backdrop contrasts with the modern furniture on the stage. It mimics Curt’s borderline obsessive focus on his research. Another excellently executed aspect of this production is the lighting. In some of the scenes, which are late at night and in a desperate situation, the cast are illuminated almost entirely by light coming from a fireplace. This creates an extremely atmospheric setting to match the tone of the play. It must not be forgotten how much of a technical challenge this would have posed to the lighting designer. I’m glad to say this was executed perfectly, and helped to contribute towards the sitting-on-the-edge-of-your-seat feeling.

There were some excellent performances, especially from the leads Martha (Charlotte Asprey) and Curt (Adam Jackson-Smith). Asprey and Jackson-Smith convey the deep friendship and companionship of these two characters, and how difficult it is for them to disagree on such a fundamental level. Asprey shows the frustration Martha experiences at Curt’s refusal to accept her desire for another child, while Jackson-Smith shows the betrayal Curt feels at the very prospect of breaking the promise never to conceive again. Alan Turkington also does a terrific job as Bigelow, Curt’s best friend who is accused of foul play with Martha by the family: in many ways he is the most likeable character in the story. And the rest of the ensemble, playing various members of the family, construct the tribal, vindictive and small-minded clan, who will do anything to avoid a scandal.

All in all, The First Man is a powerful drama set in a cosy venue, with some great performances. I don’t think this play will be to everyone’s taste however: some of the scenes are difficult to watch due to the content of what the characters are going through, and the script does tend to carry on a little in certain aspects. I also found Curt’s sudden change of heart with regard to his son at the end a little hard to swallow. None the less, in terms of delivery and execution, this is a top notch production. 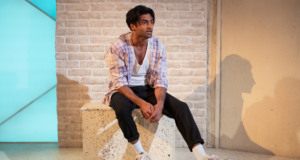