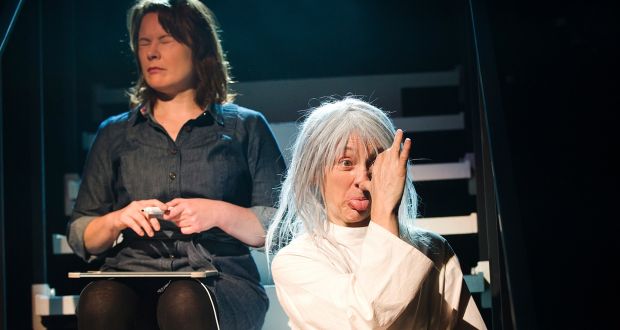 Pros: The cast are incredible: it is very easy to become completely immersed in the play and to forget they are acting.

Cons: The time jumps make it a little confusing, and as a result the play drags slightly towards the end.
Plaques and Tangles, Royal Court Theatre – review

Pros: The cast are incredible: it is very easy to become completely immersed in the play and to forget they are acting. Cons: The time jumps make it a little confusing, and as a result the play drags slightly towards the end. At the very top of the Royal Court Theatre is a small studio, just two rows of seats on either side of a simple stage. It is here that the intriguing and heartbreaking new play by Nicola Wilson, Plaques and Tangles, takes place. The play jumps between different stages in Megan's life: Megan (Monica Dolan) at 21,&hellip;

This is an incredibly intense play; it left me stunned and thinking it over in my mind for the rest of the evening.

User Rating: Be the first one !
At the very top of the Royal Court Theatre is a small studio, just two rows of seats on either side of a simple stage. It is here that the intriguing and heartbreaking new play by Nicola Wilson, Plaques and Tangles, takes place.

The play jumps between different stages in Megan’s life: Megan (Monica Dolan) at 21, 47, 32 and 27. One of the final scenes in the play is the night she meets her future husband, on her hen night before a wedding that wasn’t meant to be. Megan has just found out she has a 50% chance of carrying the gene for Early Onset Familial Alzheimer Disease which is a hereditary form of Alzheimer’s, affecting people as young as 30. Before this moment we witness Megan’s life with her husband and children, and the impact of the disease as it progresses. One of the most poignant lines of the play is ‘I’m not done yet’; it’s a terrifying thought that we really have no control over when we will be ‘done’.

We also see the struggles of Megan’s loved ones as the disease takes hold. The most heartbreaking scenes are the interaction between Megan and her daughter Lila (Alice Felgate). Lila comes to Megan seeking advice as her first period has started, but at this point Megan starts to lose her train of thought and jumbles her words. For me, Lila’s look of utter terror and desperation was the most hard-hitting moment in the entire play. In another incredibly emotional scene Megan mistakes her daughter for her mother, and poor Lila tells her ‘I’m not your mother, I’m a child … You’re supposed to look after me!’. There are many intense moments in this play, but the time jumps are cleverly positioned to take the audience back to happier times, just before you can’t bear any more.

To signal the time changes a tangled mass of light tubes, representing a brain, pulse above the stage; the staging is very reminiscent of Nick Payne’s Constellations. The set is simple with just a staircase and a bed, although this bed also doubles as a dining room table and a globe workshop with some clever alterations. The simplicity enhances the power of the wonderfully written script and keeps the focus on the characters, who are brought to life by an incredibly strong cast.

At times the play loses its continuity and towards the end I found myself becoming confused, but that could also be a clever tactic to emphasise Megan’s own experiences. I did find myself getting restless towards the end as the storyline became harder to follow, but overall the pace of this play is brilliant.

I didn’t know that plaques and tangles are in fact currently believed to be the main causes of the cell death and tissue loss in the brain of an Alzheimer’s patient, and there are hints that Megan might like to be involved in trials for new treatments. Even when she is first told she might have the gene at age 21, it is stated that there will probably be a cure by the time she’s at risk. All these messages raise questions about whether you’d want to know if you are likely to develop a fatal illness in 20 years, and how much of our lives we can really control. All in all, this is an incredibly thought-provoking play and just what you’d expect from a theatre that prides itself on cultivating new writers!