You can use WP menu builder to build menus
Home » Reviews » Musicals » In The Heights , King’s Cross Theatre – Review 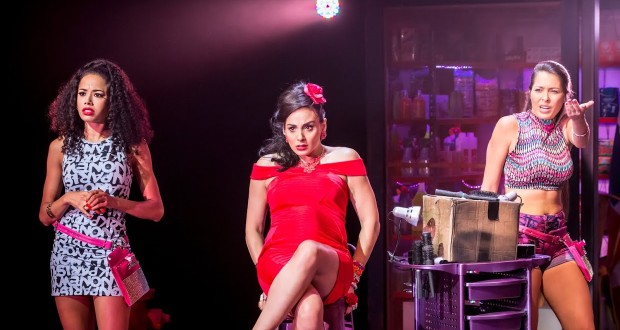 Cons: Minimal; act one perhaps a bit too long.
In The Heights , King’s Cross Theatre – Review

Pros: Abundant energy, slick choreography, wonderful songs. Cons: Minimal; act one perhaps a bit too long. Discovering new theatres in London is one of my favourite things and the stunning King's Cross Theatre, a new purpose-built 1,000 seat venue situated behind the iconic train station in north London, is a triumph. As we mingled in the bar pre-curtain up, the sounds of the New York subway, subtly played distant sirens and various train platform announcements, set the scene beautifully. By the time we had been escorted to our seats, through Platform 1, and looked around the striking and multilayered&hellip;

An exhilarating night of cutting-edge musical theatre that eats any Duracell bunny's dust!

User Rating: Be the first one !
Discovering new theatres in London is one of my favourite things and the stunning King’s Cross Theatre, a new purpose-built 1,000 seat venue situated behind the iconic train station in north London, is a triumph. As we mingled in the bar pre-curtain up, the sounds of the New York subway, subtly played distant sirens and various train platform announcements, set the scene beautifully. By the time we had been escorted to our seats, through Platform 1, and looked around the striking and multilayered set, we knew we were in the projects of New York.

In The Heights is a multi-Tony award winning musical that tells the trials and tribulations of an extremely close Domican-American community in Washington Heights, New York. Through non-stop energy, breathtaking dancing and intoxicating songs, the characters give us a unique look into 72 hours of their lives which includes things like a heatwave (and that’s just the dancers!), a blackout, 4th of July celebrations and who to love. It’s thrilling. Imagine Rent, West Side Story and Ricky Martin’s sexiest Latino music video all mixed together in a pot and that’s In The Heights. This show is off the richter scale!

The music and lyrics by show creator Lin-Manuel Miranda are stellar and relentless from the very first beat. I’m not a big hip-hop ‘down with my homies’ kinda guy, but Miranda’s songs are so fresh and contemporary that I, along with a 90-year-old audience member sitting directly in front of me, was tapping away. Don’t be put off by the rapping and hip hop as Miranda’s score also has some wonderful and heartfelt ballads that will get you crying. The likes of Breathe and When You’re Home are just divine and had this reviewer welling up. The book, by Quiara Algeria Hudes, is equally strong and the story moves with a great sense of pace and there are some truly beautiful moments. I did feel that the plot was at times a bit Disney cardboard cut-out, but you don’t mind because this show ticks all of the musical boxes we’ve learned to expect and, if truth be told, actually want.

The 20-strong cast, thanks to the intoxicating choreography from Drew McOnie, move around the stage like boiling lava. With every number and every step, my spine was tingling at the relentless energy of this young and dynamic cast. Luke Sheppard, the show’s director, has done a magnificent job of creating a show that is fun and fast paced, yet poignant and moving in equal measure. 96,000, Blackout and Enough (performed to perfection by the stunning Josie Benson) were some of my favourite scenes and the creativity and execution was just fabulous. Lead protagonist, Usnavi (yes thats US Navy), is played by the rather dapper Sam Mackay and is a joy to watch and listen to. From the get go you are rooting for him. Lily Frazer is transcendent as Nina with a voice like liquid silk. Hunky and velvet-toned Joe Aaron Reid exudes hot Latino spirit as Benny. A personal highlight has to be Victoria Hamilton-Barrett as the ballsy and brash Daniela. Hamilton-Barrett, with her big hair and big belly (she’s six months pregnant) radiates and commands the stage with every cheeky grin or raised eyebrow. She’s a delight.  Another highlight has to be Eve Polycarpou as the older and wiser neighbour Claudia. Her Paciencia y Fe was out of this world, and her performance, especially alongside Mackay, touched me so much that I called my Nan after the show just to tell that I love her.

This is a musical for a new generation of theatresgoers and I promise you’ll be taken to unimaginable heights!