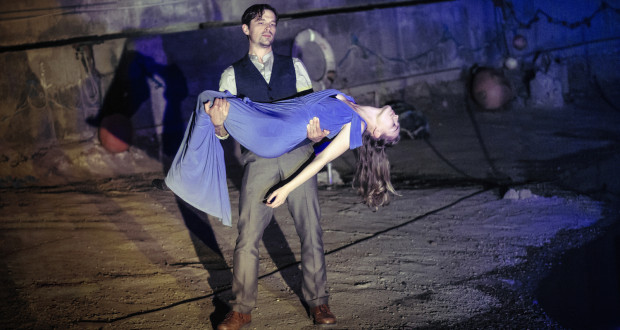 Pros: A delight for theatre history and Shakespeare buffs, the play makes extraordinary use of its amazing location.

Cons: This isn’t for those of us looking for a sophisticated night out at the theatre with plush seats and polished plays.
Reckless, The Rose Playhouse – Review

Pros: A delight for theatre history and Shakespeare buffs, the play makes extraordinary use of its amazing location. Cons: This isn’t for those of us looking for a sophisticated night out at the theatre with plush seats and polished plays. Let’s be clear. The Rose Playhouse is a theatre but as it sits on the site of The Rose – built in 1567 – it’s also an archaeological site. The tiny foyer houses models and information displays about the theatre’s discovery in 1989. The bar is on a trestle table and there is no toilet or heating (but free&hellip;

Let’s be clear. The Rose Playhouse is a theatre but as it sits on the site of The Rose – built in 1567 – it’s also an archaeological site. The tiny foyer houses models and information displays about the theatre’s discovery in 1989. The bar is on a trestle table and there is no toilet or heating (but free blankets are available). The West End, it is not. So if glamour’s your thing, you’d best stop here.

But The Rose Playhouse does have something no other theatre can match: a hotline to history. The performance space juts out like a viewing platform in the corner of the vast space underground where the excavated remains of The Rose lie. It really is a working archaeological site. Just there, we’re told later, on the tiny stage we can just about make out, Edward Alleyn performed Marlowe and Shakespeare. Just by there. Really.

Bringing a piece of new writing to such a space must take supreme confidence. And writer, co-director and lead performer Rebecca Roger’s Reckless shows plenty of that. The play fills every corner of the cavernous site. The submerged remains of The Rose and the exposed building foundations are transformed into the harbour home of a small island community in this meditation on love, loss and history.

It’s beautifully done by set designer Amy Harris (although could have lived without the puppet seagulls). The performance space brings the actors up close for the telling of the intimate tale, while across the site on another level we observe tiny actors in the distance; just as the characters watch each other in the story, waiting for the past to unfold into the future.

At the heart of Reckless is a grief-stricken old man’s (Blake Kubena) obsessive and suffocating love for his boy (Simon Rodda) who craves life and love beyond the confines of their island. The boy’s mother was lost to sea when he was a toddler and her spectre, along with that of the exciting and treacherous sea that took her, fill the play.

As the boy breaks free, so does the truth about the past – with tragic consequences. Rebecca Roger’s harbourmaster guides us through the story with an easy charm but it’s as the wife she really shines.

Performances are strong across the board, although developing the relationship between the old man and the boy could add some serious emotional clout. Edward Bijl is a delight as the hapless lighthouse keeper. His charm, humour and warmth throw some relief on proceedings even if it does seems to be his character’s sole function.

Reckless is a wonderfully evocative piece with lighting and set design powerfully drawing out the themes and mood. And, although a few song choices jarred, the music (Jon Buckeridge) and sound design (Luke Pajak) help the audience imagine an isolated island community and do a great job of filling the enormous space.

The play, which has been hastily reworked for The Rose Playhouse, is nothing but enhanced by its environment. While it could probably stand some tightening of the narrative and further exploration of the character dynamics, it offers an exciting and unique experience.

And even if the play doesn’t float your boat, it’s worth it to spend time in the stunning space that you’re welcome to ponder after the show with the assistance of a knowledgeable volunteer. An evening at the theatre like no other.