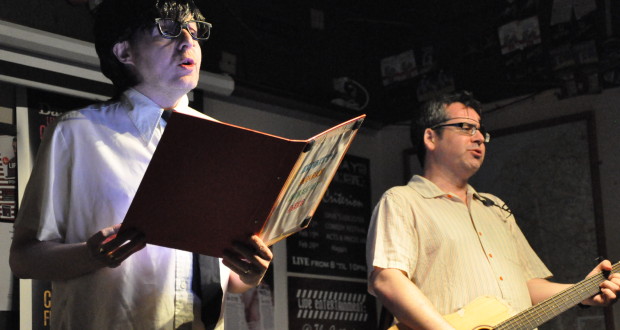 Cons: This may not be the most polished or slickest of shows – a problem for some, although not for me!
Hey Hey 16K, Camden Comedy Club – review

Pros: An hour of uplifting comedy, interspersed with very funny songs Cons: This may not be the most polished or slickest of shows - a problem for some, although not for me! The problem, or the joy depending upon how you look at it, of fringe theatre is that you never really know the quality of what you’re walking into. You can accidently stumble across some real gems, or be utterly disappointed by that show that nine different people have recommended to you. Hey Hey 16K manages to combine both that brilliance and crappiness within one show, the important&hellip;

An excellent way to spend an hour; I defy anyone to leave not feeling cheerier for the show they’ve just experienced. And you’ll also leaving humming, which may be slightly more annoying…

User Rating: Be the first one !
The problem, or the joy depending upon how you look at it, of fringe theatre is that you never really know the quality of what you’re walking into. You can accidently stumble across some real gems, or be utterly disappointed by that show that nine different people have recommended to you. Hey Hey 16K manages to combine both that brilliance and crappiness within one show, the important thing here being that they completely acknowledge their own limitations. They don’t try and pretend that this show is anything other than lighthearted comedy, featuring two middle-aged men performing comedy songs in bad wigs. And for that reason it’s an absolute pleasure to watch.

The premise of the show, although to be honest it’s hardly important, is that MJ Hibbert travels back in time to talk to his geeky teenage self, performed by Steve with the unwavering conviction of someone who has clearly spent plenty of time with teenagers. In doing so, events unfold that ultimately require Ada Lovelace (in a Princess Leia wig) and the current Hibbert to convince his teenage form of the importance of being himself and to ignore the urge to ‘be normal’. This story is a very loose framework on which to hang songs, including Hey Hey 16K itself, Hibbert’s internet phenomenon from a decade ago.

The songs are undeniably very funny – songs about how to pick the correct beer, the delights of coming from the Fens and what life was like in the 80s all have the audience in giggles. I was particularly delighted by the song which validated my utter existence: 20 Things to Do Before You’re 30 told me it was absolutely fine that I was ignoring my peers’ pleas to throw myself off high bridges with just a rubber band for support. MJ Hibbert has been compared to Billy Bragg in the past and for good reason – this Bragg has just temporarily laid his political angst to the side, and taken to singing about his favourite Doctor Who companion.

Seeing comedy at the Camden Comedy Club always feels like the real deal: up a tiny flight of stairs at the back of the pub, handing over your money on the door, slightly sticky flooring throughout and a dodgy looking red curtain as a back drop. I wouldn’t have it any other way. All the super-polished, high-res, ultra slick comedy shows out there begin to feel so impersonal after a while, and this show is nothing if not personal. The best sort of comedy has true heart, and this show has it in bucket loads. I left with the biggest smile humming the title song – what more could you ask for from an hour long comedy music show?

Written and performed by: MJ Hibbert and Steve
Booking Information: This show has now completed its run.