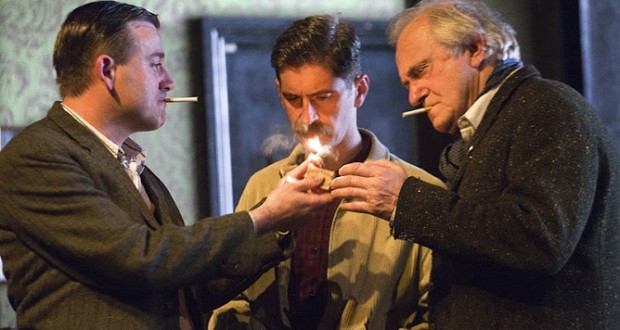 A gripping and hard hitting drama that tickles the funny bone: delightfully macabre.

The Royal Court has always been at the forefront of incredible work from undiscovered, new and established writers. Its new production, Hangmen, is a testament to the ethos of this wonderful theatre. Written by acclaimed writer Martin McDonagh, whose first play The Beauty Queen of Leenane premiered at The Royal Court 20 years ago, Hangmen is an outstanding, jaw-dropping, bold black comedy that explores the abolishment of hanging in the UK in 1965. Not the chirpiest of subject matters but McDonagh’s script is pure comedy gold. Much like his big screen successes, the brilliant In Bruges and more recent Seven Psychopaths, McDonagh’s new work holds no punches with hard-hitting drama, fraught tension and hilarious situations. It is a thrilling night of theatre.

The plot revolves predominantly around Harry Wade, who just happens to be the second-best hangman in England. But what’s this local celebrity, who now owns a pub, to do on the day they’ve abolished hanging? It’s an interesting conundrum. Amongst the reporters and sycophantic pub regulars dying to hear Harry’s reaction to this sudden news, a peculiar stranger arrives on the scene, hellbent on revenge – or is he? That’s about as much plot I want to give, as it is the constant flow of unexpected twists and turns that makes this play an absolute must-see.

The opening scene, set in a prison cell 2 years before hanging is abolished, has to be one of best opening scenes of any production I’ve ever seen. Josef Davies, making his professional theatrical debut, superbly plays Hennessy – a man professing his innocence as he’s being led, pushed and shoved towards the gallows by Wade and his bungling team. The noose falls, the neck breaks, the rope fidgets and the audience, along with Hennessy,  don’t breathe. If that wasn’t enough the set shift as time moves forward 2 years to 1965 is something that I don’t think I’ll ever forget. Anna Fleischle’s set design across the entire production is astounding.

David Morrissey leads the stellar cast with his strong and vulnerable portrayal of Harry. His performance was so good, I’ve now forgiven him for Basic instinct 2.  His arch nemesis, the UK’s number 1 hangman Pierrepoint, is played by John Hodgkinson and, although only only on for one scene in act 2, he commands the stage.  However it is Johnny Flynn’s portrayal of Mooney, the weird visitor from down South, that steals the show. Flynn’s deluge of wonderful lines are delivered with such conviction; he is a joy to watch. Its Flynn’s performance that makes this entire production so unsettling and charged with tension. The awkward hilarity is abundant throughout this gripping 2 hours and thats especially thanks to Simon Rouse’s priceless performance of deaf and drunk Arthur and Reece Shearsmith’s depiction of the stuttering and bumbling Syd. I’m a massive League Of Gentleman fan and this play allows Shearsmith the joy to tap into that dark and morose sense of humour perfectly and he relishes in it. The scene with Syd and the fallen chair literally still has me quietly chuckling and giggling away days later. Sally Rogers, as Wade’s hard done to wife Alice, is a delight as is Bronwyn James, who’s also enjoying a professional theatrical debut, as Wade’s naive teenage daughter. All of these incredible actors move around the stage so beautifully thanks to the ingenious direction from Matthew Dunster. Each step taken, be it for a gag or a dramatic pause, has subtle purpose and is executed beautifully.

Hangmen is Martin McDonagh’s first new play in London for more than ten years and I have no doubt this almost sold out season will be extended or get a well deserved West End transfer.