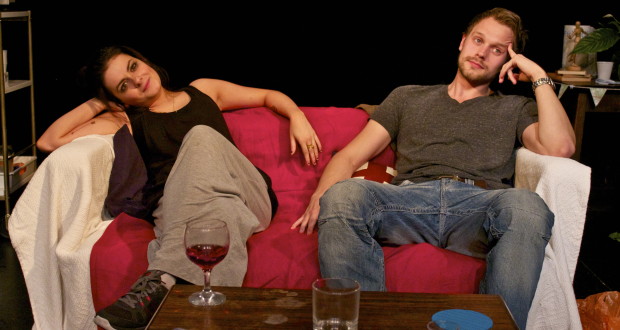 Pros: A very relevant and contemporary script, with young, fresh performers. Cons: A faltering start means that the pacing feels difficult at times. I wish people would stop telling me how amazing life is in your twenties. I know that my friends and most of the rest of my generation are bombarded, constantly, with unrealistic expectations in the media of the life we’re meant to be living, and how amazing it’s meant to be. For most of us, it’s just not true - we have huge piles of student debts, crippling rent prices and none of the stability that&hellip;

A new play covering themes pertinent to many young people, and which improved immeasurably once the performers settled into their roles and relaxed.

I wish people would stop telling me how amazing life is in your twenties. I know that my friends and most of the rest of my generation are bombarded, constantly, with unrealistic expectations in the media of the life we’re meant to be living, and how amazing it’s meant to be. For most of us, it’s just not true – we have huge piles of student debts, crippling rent prices and none of the stability that came with the marriage and kids of people our age previously. I’m not complaining about my life, but I wish people would resist the temptation to tell me it must be amazing. Kevin Lee’s new play, Different Class, sees two young friends debating so many of the issues that I’ve had debates with friends about: is it still worth going to university? Why am I forced to pay such ridiculous rents in this city? Why hasn’t he just called after he made it so clear he liked me? I never claimed all of the debates were deep and meaningful…

Coming in at just over an hour in length, Different Class is a whistlestop tour through the cares and concerns of Andy and Maria. Taking place the morning following a blowout party, Maria and Andy talk through the things that matter to all of us: what makes us happy? Are we doing the right things with our lives? Are the relationships we have the best they could be? And he does it well, with convincing dialogue. It’s a naturalistic drama, with a compelling relationship between the two leads which helps the audience to believe that this conversation could be unfolding in the flat above their own. Initially both actors seemed to struggle with the pace of the piece – for naturalistic drama to work well you need the speed and tempo of real speech, and I was concerned the whole play was going to fail as a result of their hesitations. But they both soon relaxed, and as they did both their flow and their conviction improved immeasurably. These friends have differing opinions about many topics and after the stilted start it became a pleasure to watch as they unfolded their feelings for each other and the audience. Every word they uttered felt so current and of the moment. Performed in front of an audience composed almost entirely of other young people, it felt very relevant to all of us, and this gave the play more depth.

Lucy Penrose, as Maria, is clearly an actor right at the beginning of her career, having recently graduated from Mountview. Despite her relative inexperience she very effectively portrays that blend of youth and maturity that you have to carefully balance in your twenties. And once the speed and flow of her performance was reached she gave a convincing and moving portrayal of a woman uncertain of what lies ahead. Robert Ansell holds more gravitas, which is just as well given the nature of his character. That is, he holds gravitas until you see him dance – I challenge anyone to not laugh out loud at the spectacular moves that he throws.

This play isn’t likely to go down as a timeless classic, at least in part because the issues it covers are so of the moment, but I will definitely be watching to see what Kevin Lee and both the young actors get up to next.

Previous: 1938: Hitler Takes Vienna, Jack Studio Theatre – review
Next: The Sum Of Us, Above The Stag Theatre – Review