Home » Reviews » Comedy » And Then Come The Nightjars, Theatre 503 – Review 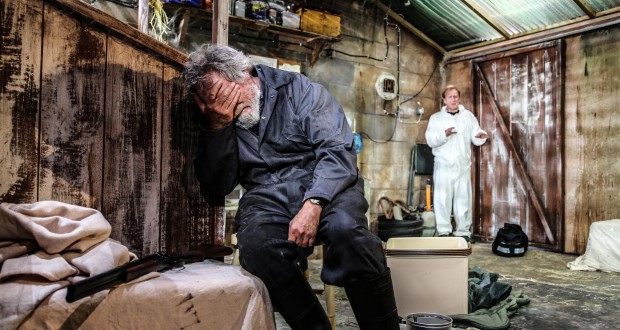 And Then Come The Nightjars, Theatre 503 – Review

Pros: It’s rare for a set to appear so thoroughly put together. With so many subtle details it creates an incredibly authentic atmosphere.

Cons: I’ve struggled to think of a con, beyond the fact that the seats in Theatre 503 are not very comfy!
And Then Come The Nightjars, Theatre 503 – Review

Pros: It’s rare for a set to appear so thoroughly put together. With so many subtle details it creates an incredibly authentic atmosphere. Cons: I’ve struggled to think of a con, beyond the fact that the seats in Theatre 503 are not very comfy! I was at school in South Croydon when the foot-and-mouth crisis struck the UK countryside. It didn’t have a direct impact on me, however I do recall a particularly powerful children’s drama about the crisis. It featured a little girl watching her family’s flock of sheep go up in flames; including a lamb she was&hellip;

Everything about this play is stunning. I urge you to go!

User Rating: 4.55 ( 1 votes)
I was at school in South Croydon when the foot-and-mouth crisis struck the UK countryside. It didn’t have a direct impact on me, however I do recall a particularly powerful children’s drama about the crisis. It featured a little girl watching her family’s flock of sheep go up in flames; including a lamb she was particularly fond of. Thus I was intrigued by And Then Come The Nightjars at Theatre 503, a play exploring first-hand experience of the outbreak.

I wasn’t disappointed; And Then Come the Nightjars is an incredibly evocative play which highlights the heart-breaking effect the disease had, especially for those in the midst of it all. The play is told from the perspective of an old farmer, Michael (played by David Fielder) and a younger vet, Jeff (Nigel Hastings), whose turbulent friendship evolves throughout the crisis and into the future.

It begins with Michael in complete denial that foot-and-mouth will ever affect his farm. He has recently lost his wife and his cows are all he has left. Jeff, however, has obvious concerns that Michael’s denial may be short-lived.  In the next scene, Jeff arrives at Michael’s barn in full protective clothing.  An incredibly angry Michael refuses to allow anyone else access to his land. Despite his passionate resistance, including threats with his gun, eventually the inevitable happens.

The audience hear shots from stun guns and see the glow of fire. Without spoiling the ending, the reconciliation between the two men, following the atrocities they witness, is incredibly moving. The situation tears them apart, but their reconciliation demonstrates how those at the heart of the crisis were forced to move on as best they could. As the fires burn outside the barn, Michael and Jeff, stare out into the audience with such expressions of desperation and helplessness. It completely broke my heart. The light changed to show the passing of time and this moment of reflection was incredibly powerful.

The impact of the disease, on the surrounding land and to the lifestyles of its inhabitants is also hinted at.  There are reports that a nearby farm is now a housing development called Shepherd’s Dell, following suggestions from Michael for other similar developments including “Honeysuckle Badger Sparkly Lane”.

The script is one of the strongest features of the play. Its subtleties and evocative language meant that, with just a few words, the entire audience were completely engrossed.  A particular highlight is the use of language to describe the smell of Autumn as “smoke and frost and wet moss”; a perfect example of the beauty of Bea Robert’s script. The play never actually mentions that foot and mouth is the cause of the atrocities, but through language and incredibly effective special effects we know that’s exactly what’s happening.

The set is stunning. Infact it didn’t look like a set at all; it looked like an actual barn. The level of detail is astounding, with cobwebs in the corners, rusty old tins and farming equipment. Simple set changes moved the play along in a steady pace and complete blackouts between certain scenes allowed welcome time for reflection. There was a particularly long gap between Act One and Act Two, which I felt was brave but effective.

With a stunning script and set, the performances of David Fielder and Nigel Hastings were the cherry on the cake. I didn’t, for one second, think they were actors…they were immediately Michael and Jeff.  A drunken scene involving Jeff, in particular, is brilliantly done, and Michael’s emotional response to the fate of his cows is also a highlight. The whole play is acted flawlessly and I’d struggle to list all the perfect moments.

And Then Come The Nightjars is a spectacular and sensitive play about a crisis which left so many with nothing. It highlights a beautiful personal story of a friendship which endures despite turbulent times.