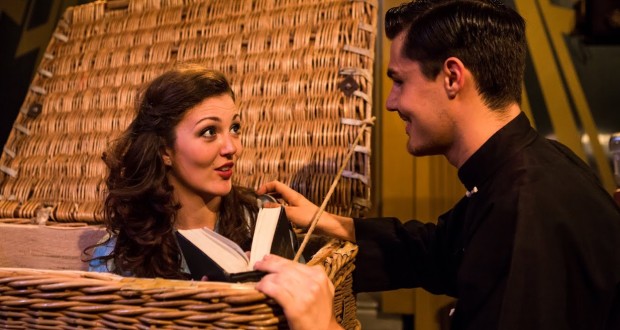 Pros: Outstanding choreography, wonderful band, strong ensemble pieces and great supporting cast. Cons: Weak leads, annoying plot and noisy air-con. If truth be told Thoroughly Modern Millie has never been one of my favourite stage adaptations. The film, with its cult status and iconic Julie Andrews' performance, is such a gem that I've always felt it should be left alone, and, with its sexist plot, should be left in the 60's. Did Amanda Holden do it any justice when it came the West End in 2003? I'm still not sure. One thing I do know is that for Thoroughly&hellip;

A fun, yet unimaginative, revival of a dated classic.

User Rating: Be the first one !
If truth be told Thoroughly Modern Millie has never been one of my favourite stage adaptations. The film, with its cult status and iconic Julie Andrews’ performance, is such a gem that I’ve always felt it should be left alone, and, with its sexist plot, should be left in the 60’s. Did Amanda Holden do it any justice when it came the West End in 2003? I’m still not sure. One thing I do know is that for Thoroughly Modern Millie to work you need big budget, big sets and big character actors, so when I heard this musical was being revived at one of South London’s best loved fringe theatres, The Landor, I must admit I was slightly dubious.

I’m a massive Art Deco fan so, as I took my seat, I was impressed with Andrew Riley’s stripped back set of the golden era of the 1920’s. Having the elevator in the middle of the stage and using it for a myriad of other entrances and exits was genius and worked well. For me this musical, apart from one or two numbers, has never had any memorable songs. It does, however, have fabulous and exuberant instrumental music, and musical director Chris Guard led his band perfectly. They were rambunctious from the very first note. Unfortunately I was sitting directly under a rather loud air-con unit and am easily distracted by such things, but I just had to look stage right at the band and was instantly cheered up.

Francesca Lara Gordon as Millie, sadly no Julie Andrews, was too weak and doughy eyed for me to connect with her. Millie is fascinating, warm, charismatic and full of bubbly personality and Gordon never ticked those crucial character boxes for me. She does, however, have a stellar pair of lungs and a stunning voice and I found some of her solos a delight. And I found Ben Stacey’s portrayal of Jimmy, a pivotal lead character, too wet behind the ears; I didn’t connect with him as the handsome leading man he was supposed to be. Like Gordon his voice is wonderful and he handled What Do I Need With Love beautifully. The love story between Millie and Jimmy is crucial to ripping apart the sexist themes of trying to find a boss so you can marry him, but I felt a serious disconnect here and sadly didn’t believe what I was seeing.

It’s the supporting cast that really shone. Having all ten of them play multiple roles across both acts did add a slight high school production feel to the show, but they embraced it and all performed with relish. Sarah Marie Maxwell spearheads the supporting cast with a wonderfully natural and effortless performance as Dorothy, and Christina Meehan’s Miss Flannery was hysterical. I do feel that her Tim Burton style wig needs a special mention as it was a thing of sheer beauty. Mrs Meers was always going to be the harder role to execute, as Beatrice Lillie’s original incarnation of the role, her last performance on the big screen before Alzheimers made her retire completely, is legendary. Steph Parry did a great job and I found myself looking forward to her Meers, with her hilarious fake Chinese accent, coming back onto stage. Carol Channing’s Academy Award winning performance as Muzzy is also a hard act to follow, but Chipo Kureya was a delight.

The true hero of this show is the choreography from dynamic duo Sam Spencer Lane and Freddie Huddleston. It’s off the chart and a joy. This production is sadly weak, but its saved by the fantastic dance numbers, the exuberant energy when the entire cast are all dancing together and the sublime tap dancing.