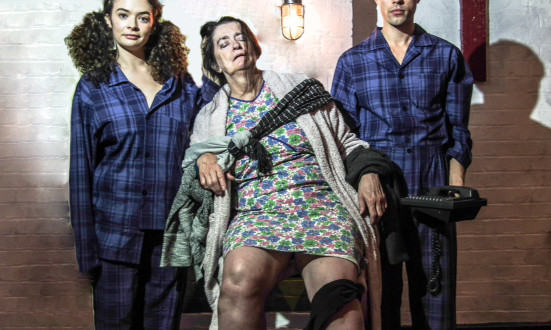 Pros: The play touches on some thought-provoking subjects and both the acting and the set are very good.
Cons: The characters are stereotypical and for a comedy, it’s sadly just not really that funny.
Clap Hands, Hackney Showroom – Review

Pros: The play touches on some thought-provoking subjects and both the acting and the set are very good. Cons: The characters are stereotypical and for a comedy, it’s sadly just not really that funny. London has a new theatre! At least, that’s how the clever people at Hackney Showroom advertise themselves. This lead to mild confusion on my part when, after nicely following the route Google Maps had spit out, I found myself standing outside a venue I recognised as Hackney Downs Studios. But, with a new name, setup and a fresh lick of paint, this section of the&hellip;

With some refinement this could be a good show, but at the moment it doesn't quite work.

London has a new theatre! At least, that’s how the clever people at Hackney Showroom advertise themselves. This lead to mild confusion on my part when, after nicely following the route Google Maps had spit out, I found myself standing outside a venue I recognised as Hackney Downs Studios. But, with a new name, setup and a fresh lick of paint, this section of the studios does look and feel very much like a new theatre indeed, and where better to go for some fresh new writing?

Clap Hands is about Ana and Gogol, two siblings who have spent the past fifteen years of their lives locked in their mother’s basement. While Ana is quite content with her life as she knows it, which is largely taken up by obsessing over singer Cruz Gentle, Gogol is understandably keen to escape. Since he can’t get out by himself, he manipulates his gullible sister into helping out. And they’re quite prepared to do whatever it takes…

As it was advertised as a dark comedy, I was really looking forward to seeing this show, because the blacker the humour, the better. So I was disappointed to find that Clap Hands isn’t really all that funny. Dark, absolutely, but overall it seems like playwright Aaron Hubbard was aiming for Six Feet Under and didn’t quite get there. As a result, the play is more strange than humorous, although there were some very entertaining moments. Cruz Gentle’s songs, composed and performed by Chris JJ Heaney, are a particular highlight in all their tooth-aching sweetness. They offset the darker elements of the show nicely, like a disturbing but funny alternative version of Cinderella.

My main difficulty with the show was that it’s tough to get a grip on the characters. Both Ana and Gogol are fairly one-dimensional, more of a collection of traits stereotypically associated with mental health issues than actual people. Ana behaves like a twelve-year-old and doesn’t understand words with more than three syllables. Gogol is a creeper with the vocabulary of an elderly Classics professor at Oxbridge. It’s hardly a nuanced portrait and since the comedy value wears off pretty quickly as well, I found it unnecessarily crude.

Hubbard does allude to quite a few interesting topics, including social control and accountability. They’re only touched on very lightly however; a sensible choice on the one hand for a 75 minute play, but on the other hand it does make you wonder why they’re brought up in the first place. You inevitably end up with more questions than answers. And that’s a shame, because even though the Josef Fritzl case that inspired the play happened a few years ago, the themes are still very relevant today.

The acting is good; EJ Martin (Ana) and Philip Honeywell (Gogol) inhabit their characters with absolute commitment, and as a result they creeped me out enormously a few times. Jeremy Drakes’ Detective Olyphant is uncomfortably intense, but nevertheless his performance does work. And Clare Almond has to be given credit for simply showing up at all, since her main function as Mumsie is to be tied to a chair.

Another good feature of the show is the set, which is very detailed; in the small auditorium of the Hackney Showroom, it makes you feel like you’re locked in the basement with Ana and Gogol, and that claustrophobic atmosphere does the play a world of good. It’s not enough to save the show though. At the moment it’s neither here nor there: not quite humorous enough for a comedy, and not nuanced enough for drama. The basics for a good play are in place, however; a little refinement could go a long way here.

Previous: Three Writers Walk Into a Forest, Theatre 503 – Review
Next: One For My Baby, Royal Central School of Speech and Drama – Review