You can use WP menu builder to build menus
Home » Reviews » Drama » A Land Without People, Courtyard Theatre – Review 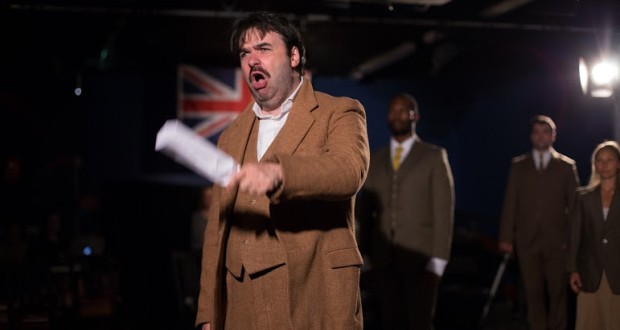 Cons: I felt that this production could do with a short interval.
A Land Without People, Courtyard Theatre – Review

Pros: Strong cast, thrilling script, great direction. Cons: I felt that this production could do with a short interval. I have recently come back from a glorious holiday in a country that I love and adore: Israel. The food, the people, the culture and the weather all contribute to making Israel my favourite place on earth. But what of its turbulent history? I recall lying on a beach in Tel Aviv recently and asking my friend to explain what it felt like to be bombed by Hammas, and I remember thinking that I need to learn more about what&hellip;

A unique theatrical experience with some hard hitting themes that will stay with you for days.

I have recently come back from a glorious holiday in a country that I love and adore: Israel. The food, the people, the culture and the weather all contribute to making Israel my favourite place on earth. But what of its turbulent history? I recall lying on a beach in Tel Aviv recently and asking my friend to explain what it felt like to be bombed by Hammas, and I remember thinking that I need to learn more about what started this conflict. Fast forward a couple of weeks and I’m sitting at the premiere of A Land Without People, a powerful and moving staging of the historical events that led up to the declaration of the State of Israel in May of 1948.

Written by Brian Rotman, A Land Without People is genuinely superb. When you consider the current state of affairs in the Middle East, and the fact that the world marks 70 years since the end of WWII and the liberation of the Nazi death camps this year, this incredible play couldn’t be more relevant. Rotman clearly did his research with a fine tooth comb as his script, revealing the violent events behind the Zionist overthrow of British rule in Palestine and claiming of land, is strong and powerful stuff and the cast relish in his words.

This is not the easiest of topics to interpret for the stage but Lesley Ferris, the director, does a stellar job. I found some of the subtle nuances in her direction, from the rambunctious scenes in the House of Commons to the more poignant scenes in concentration camps, both moving and original. Any play that can make me occasionally cry uncontrollably across 90 minutes gets my vote! The play is split into four complete acts and there is no interval, which is perhaps a small oversight as I really did feel the need to compose myself halfway through.

A Land Without People is spearheaded by a solid and unified ensemble of just 5 actors. The cast play a variety of historical figures each with their own unique interpretations and it’s a joy to watch. Jules Brown as Malcolm McDonald combined with Sifiso Mazibuko’s Chaim Weizmann is a strong start and both give strong performances throughout. Roy Khalil as both Winston Churchill and David Ben-Gurion, is outstanding. Tracey-Anne Liles as the leader of the house of commons is brilliant and her handling of the puppet of Fahimeh Ali Mustafa Zeidan is heartbreaking. Elena Voce as Gurion’s wife and a handful of other key characters is stunning. I was fortunate to catch her eye while she was reciting a speech and I found her incredibly focused and steadfast. The monologues and speeches being poured out by all 5 of these great actors are relentless and sublime. I cannot recommend this play enough, as the acting and hard hitting themes just blew my mind. If the script and performances aren’t enough, the wonderful use of sound from designer Katie Whitlock adds to the drama. The sounds of the chanting angry crowds, the snow storm in Auschwitz and the slamming of doors all help create such an intense sense of storytelling. It is thrilling.

I can’t remember the last time, if ever, I saw a play that made me re-evaluate my stance on something so completely, and A Land Without People had that affect on me. One minute I was pro Jews, then I was pro Palestine, then pro Jews and it was this constant to-ing and fro-ing of emotions that makes this play such a powerful rollercoaster of emotions. I got to meet the cast very briefly afterwards as I wiped another tear away, and I found them all so dedicated to not only their craft, but this important story that needs to be told for generations to come.