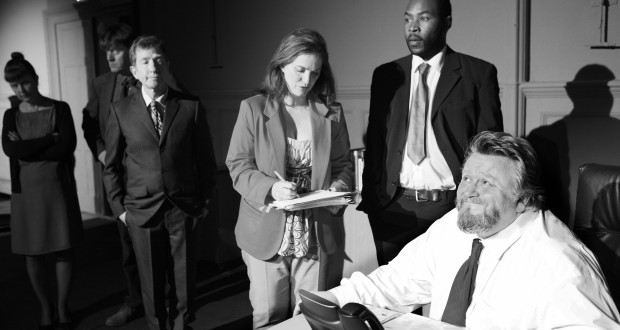 Cons: This is a political play. So might not be to everyone’s tastes. You should go and see it anyway!
The Inspectors Call, Theatro Technis – Review

Pros: Witty, moving and dangerously sharp. Cons: This is a political play. So might not be to everyone’s tastes. You should go and see it anyway! I have a tremendous amount of respect for teachers. Whenever I hear someone express anything remotely along the lines of ‘teachers shouldn’t get all those holidays’ or ‘I work as hard as any teacher and I don’t get all that time off’ it’s all I can do not to launch myself at them. My mum has very recently retired from 40 odd years in teaching. Growing up I watched her pour herself into&hellip;

‘Outstanding’ piece of theatre exploring the relationship between schools and Ofsted.

I have a tremendous amount of respect for teachers. Whenever I hear someone express anything remotely along the lines of ‘teachers shouldn’t get all those holidays’ or ‘I work as hard as any teacher and I don’t get all that time off’ it’s all I can do not to launch myself at them. My mum has very recently retired from 40 odd years in teaching. Growing up I watched her pour herself into it.

So as the lights went down on Peter Campling’s newly written play, The Inspectors Call. I knew it couldn’t be long before I was furiously sympathising with all it had to say about teaching today. Yet this play wasn’t really about teaching. It was about the governing and management of a school.

Head teacher, George, has headed up Ardley Green, a state secondary school in a challenging area, for 12 years. It’s the beginning of a new year. Despite the ‘long’ summer holiday, George hasn’t had much time off. He’s been planning this year ever since the last one ended. He is immediately concerned with the prospect of an inspection from Ofsted which could come at any time. So he goes through the motions of the yearly start up meetings, plotting out his weekly calendar and welcoming the fresh load of newly qualified teachers, but the threat of Ofsted forever looms. George is directly accountable for the school’s yearly performance. Inspection is a big deal for him and, as the year plays out, this has disastrous personal consequences.

The play suggests that head teachers are stuck between a rock and hard place. His teaching staff work bloody hard. After loses of colleagues the previous year, they are scared for their jobs. The newbies are eager but woefully inexperienced on a practical level. The leadership team work awkwardly together; knowing they all harbour very different attitudes to teaching. The governors seem supportive but are chaotic and the input from the Local Education Authority is inconsistent and threatening. The school sits in an incredibly challenging area with parents and children alike bursting in at the drop of a hat, being physically and verbally abusive. On top of it all George desperately needs to draw up a new marketing plan.

Campling’s writing is excellent. The direction is slick. The acting and characterisation from the entire company is faultless. It’s all very witty and dangerously sharp. For my part there were tears but also anger. The play obviously plays up to caricature. It’s like a serious version of the BBC’s 2012 or W1A. I work in an organisation similar to those portrayed in those shows and I know that the caricature is pretty much just actual truth. So as Campling is an ex-teacher this only makes the play all the more angering and worrying.

What it demonstrates so well is how differing political outlooks sparring on the correct approach to schooling end up ultimately tearing everything apart. None of them are necessarily wrong in theory. But theory is incredibly different to practice and Campling’s core message is exactly that. He agrees that schools must be subjected to scrutiny, but context is the key to everything. The outcome of George’s downfall is the school ‘going academy.’ I am no expert on academies. From a little research though, my instinct is that ultimately it will just perpetuate the cycle, just with different people in the same roles. Some schools will thrive, some will struggle tremendously and some will just tread water. In 5 years’ time academies will probably be scrapped or reconceived entirely anyway – let’s be honest.

Whatever happens it will still be at the expense of those individuals stuck between a rock and a hard place; who are there because they care. Surely one doesn’t get into working at the front line of the education system, and more importantly stay in it, these days unless they care? So let’s scrutinise them, yes of course, they’re teaching our children! But let’s ALL support and listen to them too! Change is always going to come and it should, but can’t it be partially from people who actually know what they’re talking about?

If you care about education in this country in any way you must see this play. You probably will. I doubt it will stay on the fringe for long, especially in this extraordinarily charged post-election climate! Either way it gets ‘Outstanding’ from me.