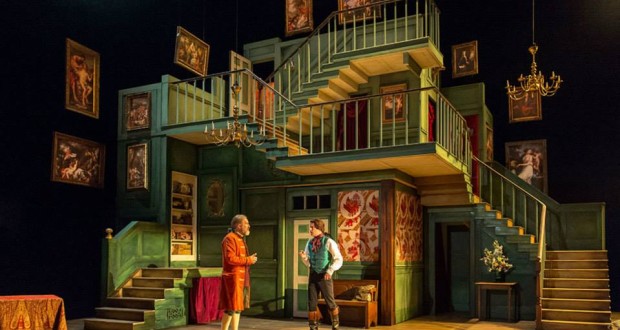 Cons:  The first act was a little slower and lighter on humour, but all was forgotten as I was chortling my way through Act II.
The Beaux’ Stratagem, National Theatre – Review

Pros:  Lavish costumes, stunning set design, first class actors and an enduring, humorous script.  Themes of love and money written three hundred years ago have changed little today. Cons:  The first act was a little slower and lighter on humour, but all was forgotten as I was chortling my way through Act II. I have to admit I was dubious about the age and plot of The Beaux’ Stratagem as I took my seat at the Olivier.  The overview indicates a story of a couple of cads from London, seeking to restore their fortune by marrying for money.  They&hellip;

With lots of laughs and superb production values this is a surprisingly relevant and very enjoyable show.

I have to admit I was dubious about the age and plot of The Beaux’ Stratagem as I took my seat at the Olivier.  The overview indicates a story of a couple of cads from London, seeking to restore their fortune by marrying for money.  They head to the countryside, where they are not know as the bankrupts they are, to seek out an unsuspecting and assumingly simple lady of means.  As the script is over three hundred years old, I was prepared for a commentary of male chauvinism and some fairly hackle raising sexism.

Indeed Archer and Aimwell , the two London beaux, arrive in Litchfield with an air of distain for the simplicities of the countryside and designs on securing the affections of a local lady of means, whom they discover is the heiress, Dorinda.  Aimwell sets a plan in motion and Archer, posing as his man servant, enters into the shenanigans distracted by the innkeeper’s daughter.  What they don’t count on is falling haplessly in love, Aimwell for Dorinda and Archer for her sister-in-law, Kate.  Kate is unfortunately in a mutually disagreeable marriage, though that does not prevent her from entertaining the idea of a tryst with someone more suitable.  The devices deployed to expedite the relationships provide much hilarity, added to in large doses by the supporting characters – the innkeeper and his daughter, the French Lord and his priest, the highwaymen and particularly the servant Scrub all add farcical yet astute substance to the drama.

The commentary on the social conditions around marriage and circumstance in the 1700s are evident though the theme is far from sexist.  The female characters are strong and resourceful and the themes are almost feminist in their design.  In particular, Kate has much to say on marriage, men and power which is layered with what we might consider modern ideas on gender equality.  There is nothing prudish or genteel in the expression and execution of the character’s desires – innuendo is thinly veiled and the action gets a little racy. What struck me was when it comes to relationships and the human condition in general, not much has changed in the last three hundred years.  There are so many parallels to our thoroughly modern lifestyles which makes the humour and circumstance relevant and certainly enjoyable.

As you would expect from the National the set is large and wonderfully utilised and the costumes are lavish.  I particularly liked the musical score (I left sing the trifle song!) and the use of musicians both on and off set added wonderful colour to the play.  The calibre of acting is also first class, the entire cast performing with energy and characterisations that left nothing behind.  It is a wonderful production that drawers out the many intricacies and insights the text has to offer without losing a drop of the nuance of the period it was written in.