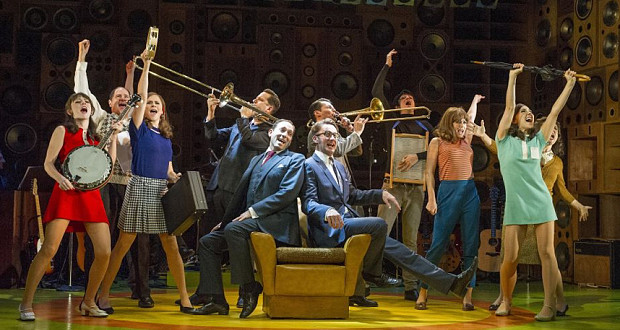 Cons: A woman in my row of the stalls took off her shoes and put her feet up during the interval. This is the Harold Pinter darling, put them back in the box. (This isn’t really a con. I found her relaxed state hilarious; please keep behaving this way whoever you are.)
Sunny Afternoon, Harold Pinter Theatre – Review

Pros: Rock concert atmosphere, outstanding cast, memorable music and sexy guys with long hair playing instruments. Cons: A woman in my row of the stalls took off her shoes and put her feet up during the interval. This is the Harold Pinter darling, put them back in the box. (This isn’t really a con. I found her relaxed state hilarious; please keep behaving this way whoever you are.) Sunny Afternoon is seriously sunny and it outshines every other new musical I’ve seen in London. After revelling in the show the other night I have since transformed into a groupie,&hellip;

User Rating: 4.29 ( 6 votes)
Sunny Afternoon is seriously sunny and it outshines every other new musical I’ve seen in London. After revelling in the show the other night I have since transformed into a groupie, devoted to what could be called the best tribute act ever to perform on a stage built in late 19th century Britain (isn’t the Harold Pinter just lovely – look at that ceiling). A ‘groupie’ is a less than desirable brush to be tarred with at most times, but given that the focus of my desire and admiration aren’t a real band, but a group of exceptional musical theatre performers, I’m ever sadder than most. To be clear, I am not on intimate terms with any members of the cast or production team, I just use the term groupie to express my enthusiasm for people who can dance, act, play and sing while I sit in the stalls eating Lindt.

As a Kinks fan I knew I would enjoy the music. With tracks from You Really Got Me and Waterloo Sunset to Lola, watching this show was like cracking out an album I hadn’t listened to in ages and remembering why I’d loved it in the first place. Classic songs are brought to life in a way that’s both reassuringly familiar and yet incredibly contemporary. It’s a testament to both the original writing and the new performance that songs like A Well Respected Man and Sunny Afternoon feel full of life, energy and relevance.

John Dagleish is fantastic as Ray Davies, singing with the moody allure of a genuine front man and pensive songwriter – quite a hypnotic voice (she says, swooning). George Maguire is equally impressive as brother Dave Davies, rocking out like a pro with his guitar and making us laugh with his outlandish behaviour. Ned Derrington as Pete and Adam Sopp as Mick are likewise charming and hilarious, because all four personalities stand out so clearly.

Beyond the thrill of the outstanding live music, this is incredible story about real characters, and the complicated relationships between the band members make it so compelling to watch. Sunny Afternoon looks at the band’s inception and their journey from working class Muswell Hill roots to international fame. Though there are emotional low points for the young men, both the music and the story lifted my spirits and made me feel happy.

It’s hard not to feel cheerful anyway, when a lot of the time the set and the energy resemble that of a rock concert. Immense sound, flashing lights and a great set – everything you’d expect from a first class musical in the West End. A number of cabaret style tables sit towards the front of the stalls, so the atmosphere is set to casual camaraderie from the word go, which you definitely feel as an audience member coming into the theatre and looking at the stage with its catwalk style thrust. My seat felt surprisingly roomy too, so I was in heaven on a number of counts.

In short, leaving Sunny Afternoon I was on an absolute theatre high. It was a complete blast and I can’t wait to see it again. Because that’s what groupies do. They keep coming back. Like stalkers.