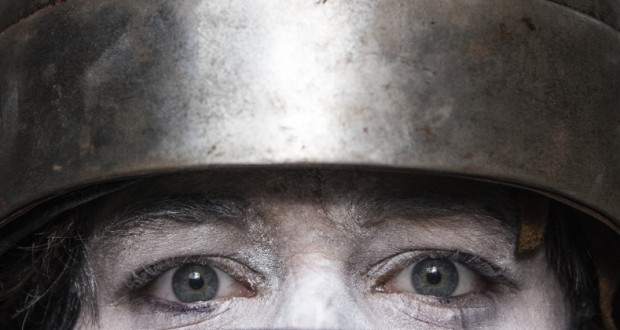 Pros: An admirable concept, an appropriately shortened script cut for the venue, and a standout performance from Robert Madely.

Pros: An admirable concept, an appropriately shortened script cut for the venue, and a standout performance from Robert Madely. Cons: An overall bland production of Macbeth with poor sightlines and acoustics. I’d heard and read much about The Rose Playhouse, but my first visit came only last week to see The Malachites’ production of Shakespeare’s famous Scottish Play. I understood that the historical venue was unique, with its view from the audience into the Tudor ruins of centuries past, but what I found was certainly different to what my imagination had built. I arrived into the space to see the audience arranged&hellip;

While the ruins of the Rose seem an ideal place to stage this Shakespearean tragedy, the space as well as the execution of the script made this production difficult to engage with.

I’d heard and read much about The Rose Playhouse, but my first visit came only last week to see The Malachites’ production of Shakespeare’s famous Scottish Play. I understood that the historical venue was unique, with its view from the audience into the Tudor ruins of centuries past, but what I found was certainly different to what my imagination had built.

I arrived into the space to see the audience arranged in a shallow horseshoe, a small hardwood stage filling the space, punctuated by a metal grate I imagine would hit the average person’s waist standing. Beyond that was the great expanse of the Rose’s ruins: a fascinating indoor reservoir surrounded by concrete and earth.

The play opens using both spaces: Lady Macbeth reads a correspondence from her husband on the hardwood stage, while as far from where I sat as it was possible to be, in the far right corner of the ruined space, the three witches meet Macbeth.

The play continues with a series of separated scenes, some close, some far, and unfortunately this set up was more distracting than it was interesting. Throughout the play I couldn’t help but admire the production’s visual concept, which is rather clever. Using the ruined, earthy, watery corners of the space to bring the ambience of dark, cold, and wet Scottish wilderness and dark castles to life is a great idea in theory. In practice, however, the corner of the ruin is simply too far away to hold attention for any long amount of time; so when many a scene took place exclusively in the far background with no movement in the stage area right in front of me, it was difficult to remain engaged, particularly as it was hard to hear and see the action taking place. Furthermore, the crouching witches were consistently completely cut out of sight by the grate separating us from the ruins.

However, I found the majority of scenes that did move into the foreground to be less than satisfying as well. Benjamin Blyth, as both director and lead may have done himself and the play a disservice by taking on the challenge of starring whilst directing in the unconventional space. The dark, edgy passion and madness of the play only occasionally came through. Performances from the majority of the cast were stiff, rehearsed, and dispassionate. Orla Jackson’s Lady Macbeth was occasionally captivating, though I would have liked to see the level of commitment she shows in the play’s final scenes throughout the production. I was disappointed to see all three witches portrayed by men — it would have been nice to see a more gender-balanced cast in my opinion.

Robert Madely’s turn as the Porter was the shining exception to the washed-out chemistry among the cast – with engaging humour and a clear master of the language, his five minute scene was by far the most enjoyable bit of the whole play. Madely also took on the role of Banquo, and the difference between his commitment to the porter and the murdered kinsman of Macbeth made clear that the real error of the production was a lack of good preparation and exploration of the script. Passion and desire were lacking here, and what is a Shakespearian tragedy without these?

While the production didn’t seem to take the script or the audience’s ability to take in the action into much account, there were a few details worth praising: the costuming was by far the best executed element of design, with its steampunk-influenced colour scheme and fashion. The script has been wisely trimmed down to accommodate for the Rose’s lack of toilets – the play runs only an hour and a half with no interval (though I must admit it felt longer).

Overall for a number of reasons I don’t feel this production did much service to the play. However, I do truly admire Blyth’s effort to weave the history of the building into the production, and I hope The Malachites and future companies will continue to experiment in making the space work for audiences and artists.

Review: 21 Round for Christmas, The Hope Theatre