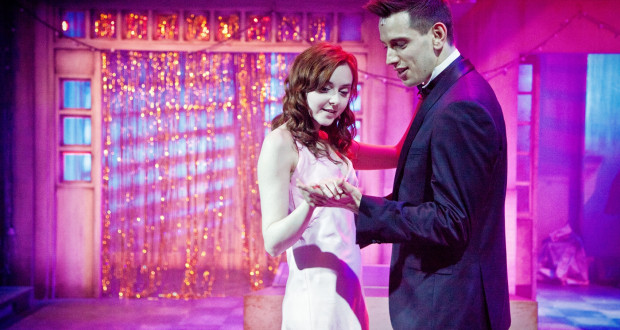 Cons: A bit too loud in parts.
Carrie: The Musical, Southwark Playhouse – Review

Pros: Strong leads, stellar ensemble cast, imaginative staging. Cons: A bit too loud in parts. My wonderful friend John is slightly obsessed with this musical, so much so that he's incorporating it into his Ph.D. It's this type of obscure fascination that has garnered this show cult status around the globe. Although you'd be forgiven if you'd never heard about it, as it's never been on the London stage. Billed as Broadway's biggest flop (thankfully that crown now belongs to Spider-Man: The Musical), this thrilling musical adaptation of Stephen King's unlikely Cinderella story was just way too technologically advanced&hellip;

A great cutting-edge production and unique adaptation that, much like the troubled teenager herself, needs to be seen to be believed

My wonderful friend John is slightly obsessed with this musical, so much so that he’s incorporating it into his Ph.D. It’s this type of obscure fascination that has garnered this show cult status around the globe. Although you’d be forgiven if you’d never heard about it, as it’s never been on the London stage. Billed as Broadway’s biggest flop (thankfully that crown now belongs to Spider-Man: The Musical), this thrilling musical adaptation of Stephen King’s unlikely Cinderella story was just way too technologically advanced for the 1980’s and closed after 5 shows. Fast forward almost 30 years and Carrie: The Musical has been revised, revamped and fully re-imagined for its London premiere at the wonderful Southwark Playhouse. Carrie is back like you’ve never seen her before.

As we entered the auditorium, we were met with terrifying scribbles along the walls and strange whisperings being echoed in our ears. Instantly, we were transported into the mind of Carrie and, as we took our seats, we could feel the horror in the air. I’m prone to a musical and horror is one of my favourite genres, so this reviewer was a happy quivering mess as the lights started to fade.

The key role, one of King’s most recognisable protagonists, is played by Evelyn Hoskins and she is astounding. Carrie is a taunted, terrified and extremely naive seventeen-year-old, with a hidden penchant for revenge and killing people, and Hoskins evoked all of these deeply hidden emotions beautifully. From her big and innocent eyes to her undeniable fury in the final minutes, Hoskins’ acting and vocal range griped us from the second we lay eyes on her. Her rendition of the song Carrie was mesmerising. What would Carrie be without her Mother? Step forward Olivier Award-nominated actress Kim Cresswell, whose portrayal of Carrie’s mentally unstable Christian fundamentalist mother was jaw-breaking. Her vocals were incredibly fine-tuned: they were like crimson blood dripping off a kitchen knife. Her performance of the stunning When There’s No One left me balling my eyes out. Both women were strong and focussed and all of their scenes and songs, especially And Eve Was Weak and Stay Here Instead, were tragically moving and beautifully executed. Director Gary Lloyd has done a great job with these women and his vision across the whole show is masterful. Carrie has evolved into so many guises since the 70’s and with this musical the horror is secondary to the far more important theme of bullying, which is a serious modern day issue.

All pulled together by the original team, with music by Michael Gore, lyrics by Dean Pitchford and book by Lawrence D. Cohen, the revised score and book for Carrie: The Musical is timeless with some magical moments. I did however find some of the bigger numbers a tad too loud in certain parts, but this was more of a technical fault and had nothing to do with the glorious singing. This brings me onto the ensemble cast, who were second to none. From the caring and unsuspecting teachers to the horny and abusive teenagers taking selfies, the cast worked incredibly well at weaving suspense and emotion throughout the two acts. A special shout-outs has to go to Sarah McNicholas, whose portrayal of Sue is wonderful, although, as a massive fan of the book, I wanted to see more of Sue’s psychological scars. Gabriella Williams delivers such a great performance as super-bitch Chris that, when her comeuppance finally arrives (and my God it does!), I was literally high-fiving the air.

The staging, especially at the prom, blew my mind! Revenge has never looked so good on stage. Who needs a red sharpie when Carrie is in the room?

Previous: Vote For Me, London Theatre Workshop – Review
Next: Interview with Benjamin Scheuer