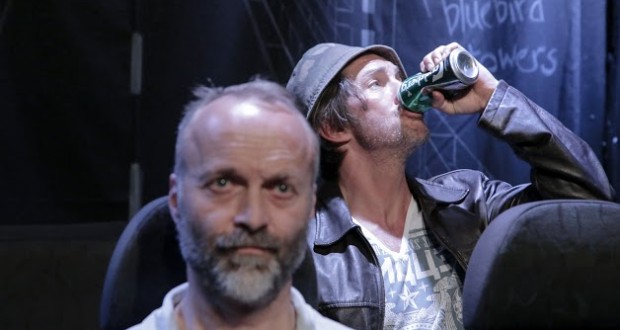 Pros: Strong and witty performances from an entertaining and varied cast.

Pros: Strong and witty performances from an entertaining and varied cast. Cons: The second half is overly sentimental. The  Tabard Theatre is decorated with a map of London on the backdrop and on the floor. Centre stage are front and rear car seats; beneath which are crammed a litter of crisp packets, drinks cans, coffee cartons, a half finished crossword. This is Jimmy's minicab, and it's where the evening's revelations are enacted. Jimmy, in a soft-spoken performance by Malcolm Freeman, is gentle man in early middle age who has the air of calm of one who practises yoga or meditation.&hellip;

A funny, compassionate and entertaining first half, let down by a maudlin and disappointing denouement.

User Rating: 4.75 ( 2 votes)
The  Tabard Theatre is decorated with a map of London on the backdrop and on the floor. Centre stage are front and rear car seats; beneath which are crammed a litter of crisp packets, drinks cans, coffee cartons, a half finished crossword. This is Jimmy’s minicab, and it’s where the evening’s revelations are enacted.

Jimmy, in a soft-spoken performance by Malcolm Freeman, is gentle man in early middle age who has the air of calm of one who practises yoga or meditation. It seems that nothing can rattle Jimmy, not even the parade of crazies whom he ferries around London on this particular evening.

The fares sit in the back seat, regaling Jimmy with their life stories, or merely haranguing him with their drunken observations. They include the Special Brew-swigging loudmouth, for whom the world is an incessant adversary; the educated, articulate drunk who needs to visit the site of his daughter’s last dwelling; the headphone-wearing crazy who, on learning that Jimmy bought his shirt in Marks and Spencer, asks “Where’s that, then?”

Some of the encounters are long enough for us to peer into the complex lives of the fares, while others last just a few seconds before the blackout that signals a change of passenger. Each is entertaining in its own way, although the parade of bizarre, feverish humanity that passes through Jimmy’s cab on a single evening does present an exaggerated and sometimes caricatured view of humanity.

Throughout, Jimmy maintains his centred, placid persona, distributing both advice and reassurance. “You use a lot of long words,” says the prostitute with whom he shares a coffee at Kings Cross. “Don’t worry about it,” he replies, “I can’t spell them.” She goes on to relate some of her life events, opening up to him with candour, as do all his fares. “I could have been a singer,” she declares. “What happened?” he asks kindly. But her reply is acid: “Nothing. Nothing happened. That’s the point.”

Between fares, we see Jimmy repeatedly trying to get in contact with his elusive ex-wife on his mobile, trying mutual acquaintances to retrieve her phone number. These are the only times at which he gets even slightly agitated, when the veneer drops and we glimpse the man behind the mask.

While we sympathise with all of Jimmy’s fares, the fact that every one of them is bitter, disillusioned and emotionally damaged begins to pall after a while. Some of the encounters feature fares whose character makes little sense, such as the world-weary London Underground engineer who suddenly asks: “Do you believe in the intransigence of love? In the communicability of the human spirit?”

The second act sees Jimmy finally catching up with his ex-wife, at the end of a long and varied evening. While the first half combined humour with pathos, with laugh-out-loud scenes interspersed with more reflective moments, after the interval we see the ‘true’ Jimmy, as the action crashes towards the big revelation that’s supposed to shock. But it’s a surprise that has been telegraphed an hour in advance, and its eventual appearance is inevitably disappointing. With none of the wit of the first half, the second act is morose and maudlin, wallowing in self-pity and sentimentality. Despite the best efforts of the strong cast, the character of Jimmy no longer makes sense, and his relationship with his former spouse seems barely convincing.

Bluebird was first performed at the Royal Court in 1998. Since then, the author Simon Stephens has gone on to achieve great success with The Curious Incident of the Dog in the Night Time. But this early work, while without doubt showing promise and a good sense of comic timing, falls apart with a denouement that leaves the audience feeling ultimately deflated.