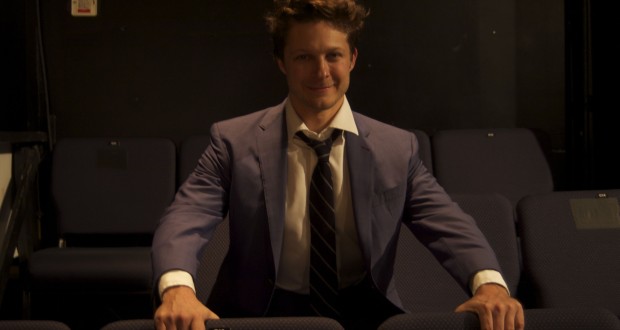 Benjamin Scheuer is the singer-songwriter whose show, The Lion, recently won Best New Musical at the Off West End Awards. The Lion is an autobiographical show, performed by Scheuer with an array of guitars. Though it covers difficult ground – death, alienation, illness and lost love – it is wry, sincere, lyrical, and never maudlin. Mark Shenton, of The Stage, described it as his ‘favourite show of all of last year, anywhere‘! Scheuer was recently in London to play a solo gig, supported by Max Runham, at the St James Theatre. Clare Annamalai went to meet him there.

Benjamin Scheuer may be the most charismatic evangelist I have ever met. His creed includes an utter determination to be honest in his songs, a strong faith in the power of community, and a belief that hard work will make him a better artist. If, on paper, that all sounds a bit worthy and earnest, it doesn’t sound at all so when it’s expressed with passion and self-deprecation by Scheuer himself, who is friendly, generous and seems the antithesis of a tortured artist. Since he pays close attention to his look, I should note that on the day we met he was wearing a cobalt blue single-breasted suit with contrast purple button holes. Whether he was also wearing fetish boots, as is his wont, I’m afraid I omitted to check.

We talked first about The Lion, which started life as The Bridge in Edinburgh, 2013. It came to the St James Theatre last autumn, and is now touring the US until the end of 2016. The show grew out of a collection of autobiographical songs, and it’s clear that by the time Scheuer is finished, those few songs will have mushroomed into a multi-media art project that is the product of many people’s commitment and talent.

After Edinburgh, the show went to the Manhattan Theatre Club in a new incarnation, with more guitars, an overhauled script and the addition of lighting design, sound design and costume. Playing different venues, around New York and in London, Scheuer honed his own performance, when he realised that audiences reacted differently to the show as a result of their varying familiarity with the context and references. ‘It was a really good lesson for me; reacting to the audience, rather than at the audience is a better way to perform, and gives a much more balanced relationship.’

Each song has its own three act structure. Each song will be able to stand on its own individually

Now, Scheuer and his trusted associates are working to extend The Lion’s reach, through video and recordings. Animator Peter Baynton has already created videos for the show’s title song and the song Cookie-tin Banjo, and is working on an animation for Weather The Storm. Of course, we don’t normally associate music videos with songs from musicals, and on this point (as on many others over the course of our hour-long chat), Scheuer himself becomes highly animated. ‘Each song has its own three act structure. Each song will be able to stand on its own individually. And what do we call that in modern parlance? We call it a single. And when you make singles, you make music videos.’ Video opens up a new audience for the material; an audience much wider than that which will ever see the show live. But it, and the song, have to be able to stand alone, outside the show, as a compelling piece of art in their own right.

That same sentiment is driving the development of the soundtrack – Songs from The Lion – which will be released later this year. As Scheuer observes, musical soundtracks have long been in decline, and were traditionally seen as a souvenir of the performance – a literal recording. With his soundtrack, Scheuer wants to create a landscape and context for the songs, once again with the aim of creating a standalone piece of art. By way of example, he cites the song Saint Rick which is sung, in the show, by an angry teenage Benjamin whose personal soundtrack at that point is Nine Inch Nails. How to give the listener that context, if they haven’t seen the show? ‘I thought “why don’t we just hire Nine Inch Nails?” So we called Josh Freese, who played drums for them, and said “come play on the record!”And so he’s playing on Saint Rick.’

The final piece of art that is, if not a spin-off from The Lion, then inspired by the same events, is a book called Between Two Spaces, 50% of whose proceeds go to the Leukemia/Lymphoma Society. Created with photographer Riya Lerner, it documents Scheuer’s treatment for Hodgkins Lymphoma through weekly photographs and journal entries. In common with his songs, the images range from mundane and quirky to shocking and intimate.

Scheuer says that he expects by the end of 2016 to be ready to move on from performing The Lion. Sadly, that means the show is unlikely to return to the UK in its current incarnation, but surprisingly he does not rule out the possibility that it could be performed by someone other than himself and ‘who cares if it’s uncomfortable for me to watch!’ Post-The Lion, he is looking forward to a change of look. At the moment he is contractually bound to keep the curls that fall so boyishly onto his face when he bends over the guitar but, being something of a dandy, he is keen to go for a dramatically different look as soon as he has the chance. His new show certainly sounds dramatically different; a small cast musical about ‘forbidden sexual desire’. He doesn’t yet know what the story will be, but thinks that the show’s theme will be ‘how the things we want most are very often the things we’re least comfortable asking for, and when we find somebody who’s excited to share those things with us, we feel less alone.’ Perhaps it and The Lion will have more in common than at first appears.

The Lion musical and all its spin-offs are an object lesson in turning painful experiences into art which is inspiring and beautiful, but often uncomfortably close to the bone. Now that his life is on a more even keel, I wonder if he will continue to take inspiration from experiences that may be more mundane, may be happier, and will certainly involve a growing cast of characters. His response is unequivocal. ‘Absolutely. I constantly write about my life. Writing is a way for me to process that which is going on in my life…it’s a way for me to understand the people around me a little better, to understand myself a little better.’ He follows the advice given by one of his many mentors, that ‘if you want to write a good song, write what you don’t want other people to know about you. If you want to write a great song, write what you don’t want to know about yourself.’ But of course, that ruthless honesty has implications for the supporting characters. How do they feel about it? Scheuer illustrates his answer with lines from a new song called Move Here, in which he asks his girlfriend to relocate across the Atlantic:
For the bed and the room, move here
For the seed in the womb, move here
For the birth and the bloom, move here. Move here
Move here, move here.
Maybe you’ll say “Ben, one step at a time”
Maybe you’re right. But I promise that I’m
So completely in love with you, my Jemima,
So move here, please move here
Whether that strikes you as a deeply felt love song, as a great deal too much information, or both, may depend in some part on your own artistic bent, and in some part on the quality of the music and performance that go along with the words. But Scheuer is evidently surrounded by artistic people, including his immediate family and Jemima, who ‘understands that my job is to tell the truth, and that’s my truth.’ ‘Storytelling with extreme candour’ is the trademark of his current favourite songwriter, Marshall Mathers (Eminen) and hip hop, he says, has the best lyricists around, right now.

When you speak to Benjamin Scheuer, or read one of his interviews, the same names crop up again and again. He is at pains to express how director Sean Daniels, producer Geoff Kraly and others have shaped The Lion, as well as his songwriting and performance more generally. He embodies the management philosophy that says you should recognise your own strengths and then surround yourself with co-workers who have complementary strengths. I asked him what he looks for in his creative team, and the answer was intimidating. ‘They have to work harder than I could ever hope, and make it look easier than I could ever hope….[they have to] surprise me and be creative and help tell the story in ways that I never would have realised, and ask challenging questions.’ Talking about his four closest collaborators, he says that what they have in common is a commitment to work hard and do their homework. They have a determination to tell the story as well, and as honestly as they can, and a focus on making good art. ‘Sean Daniels’ primary job on The Lion was to…tell me when it was boring, when it was stupid and when it was confusing. If you take away the boring, take away the stupid, take away the confusing, your thing gets a whole lot better.’

To be a songwriter, all you need is a pencil, some paper, and a desire to work.

He talks all the time about being part of a community of artists, of peers he admires (Shaina Taub, Lin-Manuel Miranda…) and mentors who have inspired him (Andrew Lippa, Mary Chapin Carpenter…). He asserts that the artists he respects are those who work the hardest, rather than necessarily those who have the most natural talent. He himself practises guitar upto eight hours a day, and makes no secret of the fact that he labours at what he does, is learning all the time, and is driven by a desire to be the best and most honest songwriter that he can be. Whilst he freely acknowledges the advantages that his relatively privileged background have given him, ultimately, he says, ‘to be a songwriter, all you need is a pencil, some paper, and a desire to work.’

Scheuer plans to spend July holed up with his pencil and paper in Williamstown, Massachusetts, writing songs for his new show and ‘discovering the characters.’ In conversation, his speech is littered with the prefix ‘super’, as in ‘super-contemporary’, ‘super-reductionist’, ‘super-different’. And though it is still just a twinkle in its creator’s eye, I wouldn’t mind betting that the new show will be super, full stop.