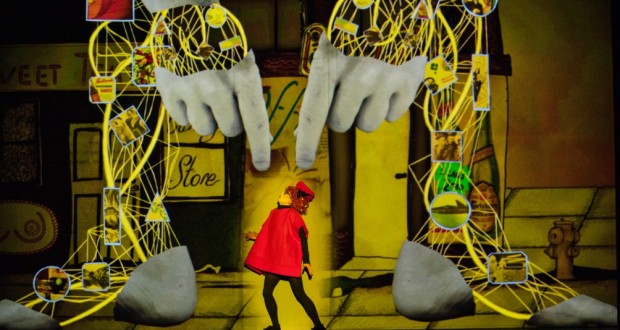 Cons: Small sections that could be accused of “style over substance”. Slightly more focus on how the story was told rather than the story itself.
Golem, Trafalgar Studios – Review

Pros: Visually stunning and continuously intriguing. An important message told boldly and uniquely.   Cons: Small sections that could be accused of “style over substance”. Slightly more focus on how the story was told rather than the story itself. 10 minutes before I was due to leave to see Golem at Trafalgar Studios, my flatmate dropped this bombshell on me; “the WiFi’s down, it’ll take 3 to 5 working days for it to come back”. I looked at him with absolute sincerity, “What are we going to do?” He didn’t know, I didn’t know, we were absolutely powerless, the&hellip;

An important piece of theatre that needs to be seen. It is fascinating and combines artistry and personality.

10 minutes before I was due to leave to see Golem at Trafalgar Studios, my flatmate dropped this bombshell on me; “the WiFi’s down, it’ll take 3 to 5 working days for it to come back”. I looked at him with absolute sincerity, “What are we going to do?” He didn’t know, I didn’t know, we were absolutely powerless, the situation was out of our hands and the depth of our dependence upon internet access was made strikingly apparent. It become clear to me how our worlds had become defined by our email accounts, social media, googling: a big blur of iPhones and laptops.

Golem tells of a world where the individual relinquishes his control over that world by relying on an obedient, in this case a Golem, to do everything for him. On the face of it Golem takes care of the banal; ordering shopping, completing administrative tasks. The bigger statement is that in handing over our control to technology, the technology will eventually control us. 1927 hurls this at us using an uncomfortable yet intricate level of technology.

Before I get ahead of myself (again), I should lay down the basic story. Which is exactly that, basic. Using Gustav Meyrink’s Der Golem as a spring board, 1927 theatre company present us with the lowly, humdrum life of Robert Robertson (Shamira Turner). Robert is every inch the nerd. A bespectacled and sweater-vested adult who still lives in the house he grew up in with his sister Annie (Charlotte Dubery) and Gran (Rose Robinson). He is even more average than the infamous Average Joe, never having had a girlfriend and working in an office providing back-up for the back-up. One evening he stops by the shop of a local undiscovered genius-turned-entrepreneur Phil Sylocate (Will Close), who sells him a Golem who can only obey. Robert’s life changes as the obedience manifests into dominance and complete control.

A very bold statement about our society it is too. Made all the bolder by the detailed and beautiful use of animation. 1927 is a company that brings story to life by combining live performance with animation so that the whole experience becomes filmic and multi-faceted. Robert’s world is illustrated impeccably, his walk to work motioned as he passes surrealist greasy spoons, brothels and street performers. The wallpaper of his Gran’s home and even a portrait of her late husband complete with bugs that crawl off of him as he is dusted. The actors interact seamlessly with their animated surroundings so that the production feels like one entity. The peak of this interaction is obviously in the relationship between Robert and his Golem who is himself an animation.

Robert’s first Golem is a loveable BFG type, made out of clay and complete with a perpetually drooping dangly bit. This Golem spontaneously combusts and is upgraded it to a smaller, smarter, zippier version. This one is full of tricks and altogether more dangerous. Their relationship hinges on the fact that the Golem has so much power that he has managed to lead Robert to believe that he is powerful, almost omnipotently so. The lines are blurred as dependence seeps in and one loses sight of what we really need and what we just think we need.

Golem is visually spectacular, subtly crammed with so much detail that the eyes are fed to fullness by the end. There is a definitive and coherent style that injects realism into the surrealism and the result is unpretentiously gorgeous. Animator and designer Paul Barritt uses it to hammer home the message that as technology progresses, the human regresses.