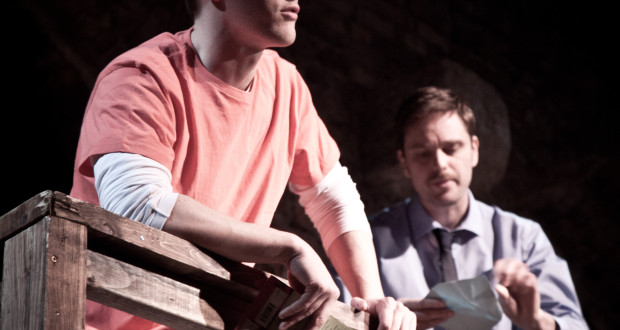 Cons: There are issues with structure and pace, and a disappointing reliance on stereotypical characterisation and setting.
Death Row Cowboy, The Courtyard Theatre – Review

Pros: Death Row Cowboy has many strengths: interesting and thought-provoking subject matter; some creative plot lines; many strong acting performances. Cons: There are issues with structure and pace, and a disappointing reliance on stereotypical characterisation and setting. Carl Brant has spent the last five years on death row for the murder of his mother and a police officer. Now, his execution date is approaching and everyone is still seeking answers. Death Row Cowboy explores a range of themes, including love, social exclusion and fear. The ambiguous focus took me by surprise, as I was expecting the production to tackle&hellip;

A solid production debut – with some great strengths, and a few weaknesses. Three Peas have potential.

Carl Brant has spent the last five years on death row for the murder of his mother and a police officer. Now, his execution date is approaching and everyone is still seeking answers.

Death Row Cowboy explores a range of themes, including love, social exclusion and fear. The ambiguous focus took me by surprise, as I was expecting the production to tackle the idea of the death sentence head on. The less focused approach has both merits and pitfalls. I like the fact that Death Row Cowboy prompts its audience to place death row in its broader social context and allows us to explore commonplace emotions.

However, the determination of the authors, Andrew Lynch and Mark McCabe, to avoid making an argument left them pray at times to rambling structure and slow pace. What is more, while Three Peas state their aim to create stories that ‘are honest and free from bias,’ Death Row Cowboy was not a neutral representation of capital punishment. The only character to voice an opinion on the subject was stereotypically dumb and morally questionable prison guard, who supported killing inmates. Three Peas would benefit from either making an argument or paying painstakingly close attention to their structure and dialogue.

Indeed, the play’s scenes do not always flow into each other very well. At one point a surreal arcade-style fight scene interrupts the otherwise realistic drama. The scene is presumably designed to represent either a dream or a fantasy of Bobby’s, and probably to mix up the pace, but instead proves incongruous and a little confusing.

That said, Death Row Cowboy exhibits some fantastic scenes and some strong acting. The opening scene, in which the stage remains stooped in darkness as we listen to Carl’s 911 call reporting the death of this mother and the police officer, is both dramatically effective and truly intriguing. Throughout the production, both Andrew Lynch and Mark McCabe, as Bobby, deliver some stand out scenes. Indeed, Lynch is able to communicate the gripping fear of a healthy young man about to face death.

Despite the general quality of the acting, there are a few issues with character stereotyping. As already mentioned, Bobby does lean towards the dumb Southern American. Unfortunately, it’s not just the characters that are stereotypical. Death Row Cowboy was set in an unspecified state in the Deep South. Hillary, the policeman’s young widow, wears a dowdy summer dress and her hair is plaited, conforming to the idea that the Southern USA remains planted in the 1950s. And while Texas and Mississippi are indeed the states Brits tend to associate with the death penalty, the majority of US states still use capital punishment, including many in the far North. This reliance upon stereotypical characterisation and imagery weakens the production’s overall impact.

On a final note, there is some good stagecraft. Lighting designer, Jai Morjaria, makes good use of lighting to represent fear and confusion. However, there are times when the stage was dimmed a little too far, making it difficult to see. A problem easily solved though!

Death Row Cowboy is Three Peas Theatre Company’s first production. It’s a promising first go. There are clear merits – Lynch and McCabe tackle a daunting subject matter; they are creative in their messaging and storyline, and there are many strong performances. Though the production is not without pitfalls, Three Peas clearly have potential.

Previous: Quiet at the back, please!
Next: King Lear – The Rose Playhouse, Review