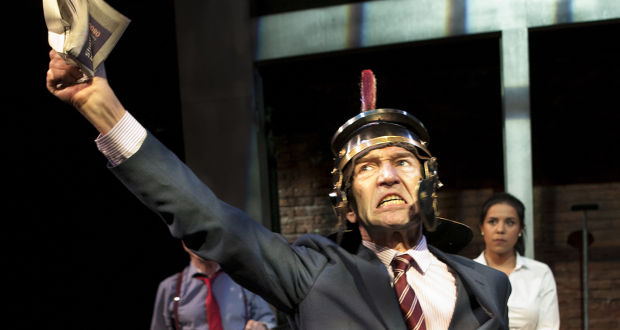 Pros: An unrelentingly scathing commentary on everything that is wrong with today’s media. Quick-witted, funny and poignant.

Cons: It takes some time to get to the crux of the matter and some details, while tantalizing, don’t add to the overall story.
Clarion, Arcola Theatre – Review

Pros: An unrelentingly scathing commentary on everything that is wrong with today's media. Quick-witted, funny and poignant. Cons: It takes some time to get to the crux of the matter and some details, while tantalizing, don't add to the overall story. You can't sit through Clarion without being awash in devilish curiosity as to by who and what former journalist Mark Jagasia might be inspired in his satire about a right-leaning newspaper under threat of closure. With a staff full of larger-than-life personalities, over-the-top eccentricities and outrageous scandal one might hope that it can't even be close to being true.&hellip;

A thought-provoking satire from debut playwright Mark Jagasia with a sharp script and a brilliant cast that delivers without a hitch.

You can’t sit through Clarion without being awash in devilish curiosity as to by who and what former journalist Mark Jagasia might be inspired in his satire about a right-leaning newspaper under threat of closure. With a staff full of larger-than-life personalities, over-the-top eccentricities and outrageous scandal one might hope that it can’t even be close to being true.

The Clarion newspaper is in decline and everyone knows it, bar its UKIP poster boy editor Morris Honeyspoon (Greg Hicks), who will only see it close over his dead body. However, the odds are against him when former war correspondent Verity Stokes (Clare Higgins) aims to scratch back the integrity of journalism, and perhaps her own as well, when an unforgivable revelation lands in her lap.

Clare Higgins’ star journalist fallen from grace is an immediately likeable force to be reckoned with, admired and feared by all, only loosing her sense of humour when it matters. She is the perfect foil for Hicks’ right-wing dictator of an editor, whose sparring sessions with Verity unveil the true meaning of political relationships. The supporting cast is also strong, particularly Laura Smithers as Pritti, the dangerously clueless work experience girl who poses a bigger threat to the paper and the world than anyone initially gives her credit for. Or, is it The Clarion that poses a grave threat to her?

Between the biting wit, the intrigue as to what exactly is going on inside the paper and juicy tit-bits dropped about Verity’s back-story (as soon as she steps on stage you instantly want to know more), the story makes you sit up and pay attention. However, the first act does move slowly and those tantalizing details about Verity’s character, are left hanging without adding to the impact of the story as it unravels. Interestingly, the climax of the story also did not ultimately change my view on any of the characters, which might actually say something deeper about those types of characters rather than unveiling any major flaw in the structure of the story itself.

In the end, however, Jagasia makes us laugh at what we hope is an exaggeration of reality, only to make us stop and think about at exactly what we are laughing; journalism’s greed for ‘the Scoop’ and to remain standing in the dying lands of print media, literally destroys the lives around us. A clear and clever piece of theatre well worth a watch.