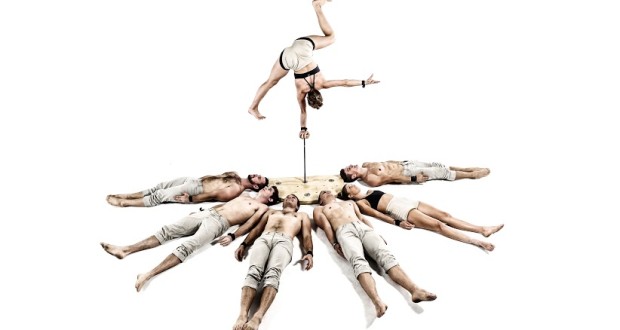 Pros: Gravity defying stunts, with a fantastic feel good atmosphere. Cons: At an hour long, you’ll definitely leave wanting more. Part of Udderbelly Circus Season 2015, A Simple Space is the first of three acts to perform in the iconic purple cow. With electrifying stunts and a super-charged atmosphere, the next two shows certainly have a lot to live up to. After performing to delighted audiences last summer, the award-winning Australian ensemble Gravity &amp; Other Myths have returned to Udderbelly Festival for a second time, and I would urge you to visit the Southbank Centre before this fantastic circus&hellip;

An incredible acrobatic display of human limits that is absolutely unmissable.

Part of Udderbelly Circus Season 2015, A Simple Space is the first of three acts to perform in the iconic purple cow. With electrifying stunts and a super-charged atmosphere, the next two shows certainly have a lot to live up to. After performing to delighted audiences last summer, the award-winning Australian ensemble Gravity & Other Myths have returned to Udderbelly Festival for a second time, and I would urge you to visit the Southbank Centre before this fantastic circus act departs London for another year.

The show starts off small, with the performers darting around the stage, throwing themselves trustingly towards the floor to cries of “falling”, only to be scooped up in the nick of time (or left to fall flat on their faces) by their talented teammates. However, they soon build to a crescendo of jaw-dropping stunts, with members being tossed around at alarming speed, and climbing each other to exhibit various terrifying balancing acts, including a human totem pole which had me on the edge of my seat.

Interspersed with playful competitions, like a hearty game of strip skipping (one for the ladies), and a comical breath-holding contest, the performance felt wonderfully raw. Most Cirque du Soleil style acts make it seem so effortless, but the real magic of this performance is that the troupe does nothing to mask the physical exertion required for such impressive acrobatics. It’s also plain to see that they’re having the time of their lives performing, and that feeling is certainly infectious. Their vitality and electric chemistry seeped into the audience, who were holding their breath and clutching their sides throughout. The camaraderie that permeates the show made it impossible to leave without feeling elated.

Not to distract from the fabulous feats, the space itself certainly is simple. A raised platform acts as a stage, surrounded on three sides by tiered seating, as well as some chairs at ground level. My sole complaint is that from where I sat – a couple of rows back in the floor space – it was difficult to see the lower level stunts clearly, so I would find a spot in the staggered areas if I were you. The low key lighting controlled by the acrobats themselves adding to the intimacy of the piece. A dynamic soundtrack was provided by a live musician who also got his fair share of stage time, and held the audience rapt in his hands whilst the other members of the company caught their breath. The whole act felt perfectly paced and wonderfully exhilarating, and the hour long duration flew by in what seemed like minutes, always a sign that you’re having fun!

An anticipated summer fixture in any Londoner’s calendar, Udderbelly Festival is the perfect place to wind down now that the evenings are warming up. It’s safe to say that the chilled ambiance and friendly buzz that fills the festival is perfectly suited to the incredible performance that has found a home there for the coming weeks. So take a trip to marvel at this awe-inspiring headline show while you still can. I, for one, can’t think of a more exciting way to while away a spring evening.