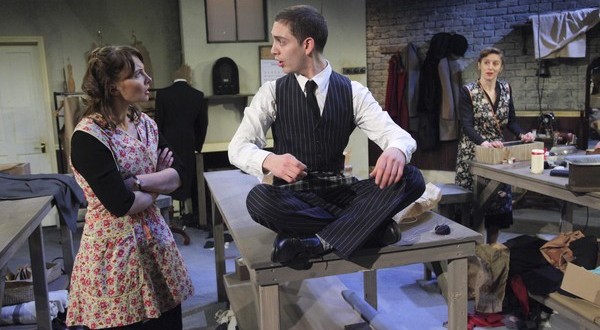 The Cutting Of The Cloth, Southwark Playhouse – Review

Cons: At a few points – only a few – the energy of the play dips.
The Cutting Of The Cloth, Southwark Playhouse – Review

Pros: Full of farce and entertaining banter.  Strong acting throughout.  Amazing set design and costumes.  Cons: At a few points – only a few - the energy of the play dips. The Cutting Of The Cloth is the work of Two’s Company, a presentation of Michael Hastings' never-performed play, a well-paced comedy drama that looks at the trade of Savile Row tailors in the 1950s.  The two lead tailors are like two pairs of scissor going for each other, such was the competition for work.  Larger-than-life Eric has moved with the times, and does his work by machine, while old Polish-born&hellip;

Love and laughter are in the details of this comedy drama of Savile Row in the Fifties.

The Cutting Of The Cloth is the work of Two’s Company, a presentation of Michael Hastings’ never-performed play, a well-paced comedy drama that looks at the trade of Savile Row tailors in the 1950s.  The two lead tailors are like two pairs of scissor going for each other, such was the competition for work.  Larger-than-life Eric has moved with the times, and does his work by machine, while old Polish-born Spijak, sits cross-legged atop the workbench, sticking to the pain-staking craft of hand-sewing, and subjugates his workers, his daughter Sydie, and apprentice Maurice, to the same outdated methods.

The cast of five is captivating throughout.  Eric, played by Paul Rider, is bursting with ambition and can’t help but highlight his success to the struggling Spijak, played by Andy de la Tour, who despite his hard work, downs a bottle of gin at lunch and disappears under the workbench for a well-earned snooze.  Eric’s aide, Iris, played by Abigail Thaw, is the funniest to observe, as she sits at her sewing machine and makes odd and random comments about feeding pigeons or the ‘blinking nerve’ of the spats going on around her. Observing Iris’s unrequited affections for her boss were pure delight. The is tremendous sympathy for Maurice, played by James El-Sharawy, who is left handed, and forced to work with a right hand set-up.  Seeing his character develop into a master tailor is most satisfying.

A massive effort has gone into set design, costume and props and I was really pulled into the world of 1950s tailoring, and witnessing the totality of this is definitely one of the evening’s highlights.  The warehouse-style set is elaborate and convincing, with workbenches covered in irons, foam presses, bodkins, thread, tape, and scraps of cloth that spill down onto the floor. It’s clear the entire cast feel right at home in their sartorial dwelling and never once make you doubt they’ve spent their lives tailoring.  The lighting has warm tones that fit well with the masses of brown paper used to wrap up the garments.  And the costumes really add to overall effect – I especially loved the double-breasted floral aprons the women wear, as they screamed 1950s to me.

I also loved being exposed to the language of the trade.  The women tailoresses are referred to as ‘kippers’, so called because they would work in pairs to ward off male advances.  And there are many other subtle observations on the customs and habits of the group, that play out and are interesting in themselves.

The energy of the play thrives when the characters are together, in the midst of the biting banter and quips, but perhaps less so when the focus shifts to Spijak and his internal world, but this is only for a tiny portion of the play.

Overall, if you love fabrics and cloth, and enjoy being transported to another time and place, albeit a work environment, this is a show you’ll really enjoy. Love is in the details, and so is the laughter. It’s no mean feat to create a special knowingness in an audience from the slightest gesture, and most furtive glance, and there are plenty such moments here.  You’ll feel the buzz of excitement just walking into the Southwark Playhouse and the bar provides a perfect setting for pre- and post-theatre drinks.  The first half of the play is very good, the second half even better.  So there are many reasons to go see this one.

Previous: A Chaste Maid In Cheapside, The Rose Playhouse – Review
Next: Shrapnel: 34 Fragments of a Massacre, Arcola Theatre – Review