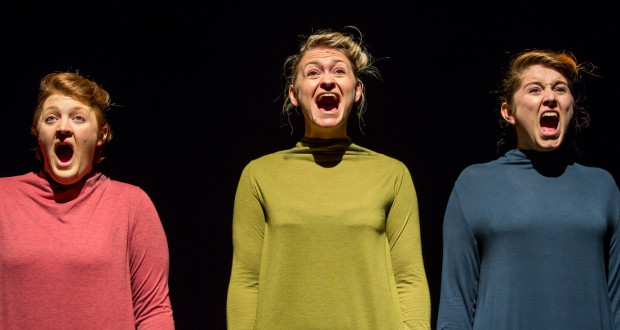 Pros: Faultless vocals, overflowing creativity and seamless dancing. Cons: The music from the bar downstairs sometimes distracted from the more poignant quiet moments. The BAC is one of my favourite venues in the capital as it prides itself on its cutting-edge productions and it happens to be around the corner from my house. Within a week of a devastating fire that engulfed the whole building, the BAC put many shows back on, demonstrating the steadfast motto: "The show must go on." It was sad to smell some of the damage as we walked around, but this didn't phase the&hellip;

An out of this world a cappella production that needs to be seen to be believed!

The BAC is one of my favourite venues in the capital as it prides itself on its cutting-edge productions and it happens to be around the corner from my house. Within a week of a devastating fire that engulfed the whole building, the BAC put many shows back on, demonstrating the steadfast motto: “The show must go on.” It was sad to smell some of the damage as we walked around, but this didn’t phase the local kids rehearsing in the corridors or the thirsty audience members in the packed bar.

I’d come to the BAC to see Mmm Hmmm. Yes as it sounds: Mmm Hmmm. When the usher announced the show to all of us mingling outside, we chuckled at his interpretation of these two sounds. Mmm Hmmm is the brainchild of the show’s performers and director Verity Standen. I can honestly say I’ve never seen anything quite like it before. It was superb!

The 60-minute show is a simple three hander, smothered in many rich levels of theatrical styles. I was transfixed from the very first hmmm. Women came onstage and hummed to beautiful pieces of mime and subtle dance that somehow seemed to depict elements of my own life. I tried to wrap my head around what I was witnessing. I had goosebumps for at least half of this show. The performers have some of the best vocals and harmonies in the business. Based in the middle of the stage, Standen leads the vocals with a stellar voice and fantastic facial muscles. Ellie Showering is based stage right and reaches notes which seem impossible – the main reason for my goosebumps. Lastly, on stage left is the beautiful Dominie Hooper, whose has a voice like velvet and the face of an angel. Each woman is independently strong as they move in between their various songs, but it is when these three divas join forces to harmonise that something truly spectacular occurs.

As mentioned, the women are for the most part, in their own allocated areas of the stage and I found this worked well. The direction is simple but effective and creative. This production doesn’t need too much direction as the indisputable star of the show is the unbelievable sound. The songs, with their beautifully witty lyrics, portray a variety of everyday themes that resonate with the entire audience. For example, losing mobile phone signal, being crammed into someone’s armpit on the tube, or even a delayed train – all get pride of place with stunning vocal and acting synergy. A personal highlight had to be the cast singing through mouthfuls of biscuit as they told us about their breaking hearts. Even with hobnobs in their mouths, the performers were pitch perfect.

The show was primarily funny, but there were also poignant and hard-hitting scenarios which were superbly executed. During the screaming scene where Showering and Hooper try to hold down Stander, I felt utterly devastated. Through the weaving of movements and sound I felt the portrayal of a victim of an abusive relationship, a girl being bullied or even someone on the verge of a breakdown. I was in complete awe.

As said above, this show really does need to be seen to be believed. Mmm Hmmm is like you’ve never seen or heard before.

This show has now completed its run at Battersea Arts Centre, but will be touring to other venues in the UK this year.

Previous: The Pursuit of Now, Buta Festival of Azerbaijani Arts, Sadler’s Wells Theatre – Review
Next: These Trees Are Made of Blood, Southwark Playhouse – Review