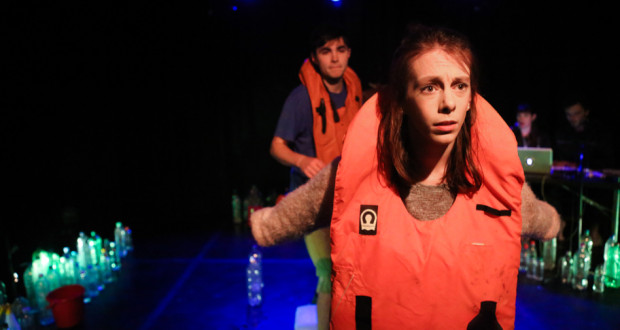 Cons: Feels like a work of progress, though it is not presented as one.
Lorraine & Alan, Battersea Arts Centre – Review

Pros: Excellent storytelling accompanied by live music. Cons: Feels like a work of progress, though it is not presented as one. The small stage in Battersea Arts Centre’s Members’ Library space is almost completely covered with plastic bottles and jugs of all shapes and sizes. The four performers and sound desk take up much of the remaining space. This is a fitting start for the intimate story of Lorraine and Alan’s journey; which begins and ends on a Norfolk Beach. The ‘selkie’ story is a Celtic myth about seals that can transform into people. It is said that female&hellip;

This is a modern retelling of a Celtic myth. Props and sound effects are used in a unique and inventive way; but the play needs a little more development.

The small stage in Battersea Arts Centre’s Members’ Library space is almost completely covered with plastic bottles and jugs of all shapes and sizes. The four performers and sound desk take up much of the remaining space. This is a fitting start for the intimate story of Lorraine and Alan’s journey; which begins and ends on a Norfolk Beach.

The ‘selkie’ story is a Celtic myth about seals that can transform into people. It is said that female selkies can shed their sealskin and turn into beautiful women. They will become the wife of any man who takes the skin and will stay on the land, always drawn to the sea. If they are able to find their own skin, they will return to their watery roots, only visiting occasionally to see any children they have left behind. Lorraine & Alan is a contemporary retelling of this story.

Alan (Adam Farrell) is a young man who recently graduated from university with a degree in Marine Biology and is struggling to find his path in life. After weeks of lie-ins and playing on his Playstation, he eventually gets a job as a tour guide with a local seal tour company, Aquaphilia. His job involves taking tourists out to the seal colonies and teaching them about the creatures. Alan loves the seals and often visits them early in the morning on his own. One day he spots a naked woman amongst the animals and rescues her, as he doesn’t know who she is or how she ended up there. In the process, he notices a discarded skin, which he takes with him. This action alters the course of his life. This version of the story, given to us by Bucket Club, follows the rise and fall of one couple through skillful use of dialogue and imagery.

The two actors, Farrell as Alan and Katie Sherrard as Lorraine, combine storytelling with naturalistic acting to share the couple’s story. Bottles represent the other characters in the tale. Sherrard’s physicality and seal vocalisations are excellent, with well-represented sadness as she is forced into a life on land. Farrell’s Alan is young and awkward, but genuine. They make an outstanding pair.

The most unique feature of the show is the live sound effects and music. David Ridely and Becky Ripley use vocalisation, live electronic music and sound effects to create the mood and atmosphere of the play. They also voice Alan’s parents. The staging is limited due to the size of the performance space and the fact the sound desk and water bottles take up a large portion of the stage. The actors would have had more freedom of movement if they had more space, and a less cluttered stage would have made the production feel more polished. Lighting could also have been used more effectively to indicate the performance area. The narrative is complete, but as the play covers such a great deal of time, I feel that the script has room for development, more plot detail and other characters. This may affect the charm of this particular production; however, this is a play with plenty of potential.

Battersea Arts Centre is temporarily closed due to a fire and is not currently taking bookings.