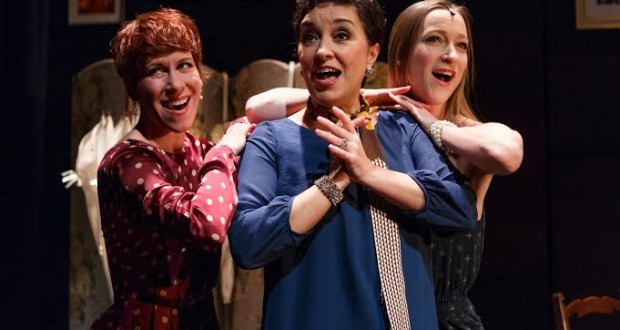 Pros: Mind blowing vocals, superb acting, seamless choreography and genius comic timing.  Cons: None (seriously) It has to be said that I'm prone to the odd musical or two. I'm constantly getting teased about the amount of times I've seen Miss Saigon (13 by the way) or Wicked (a mere 11). Musicals take you away to distant lands, make you feel deeply, and above all, make your feet tap. So you can imagine my delight at being invited to attend the opening night of a show dedicated to the very man that spearheaded the modern day musical, Jerry Herman.&hellip;

A thoroughly enjoyable vocal tour de force. A sheer delight of an evening.

It has to be said that I’m prone to the odd musical or two. I’m constantly getting teased about the amount of times I’ve seen Miss Saigon (13 by the way) or Wicked (a mere 11). Musicals take you away to distant lands, make you feel deeply, and above all, make your feet tap. So you can imagine my delight at being invited to attend the opening night of a show dedicated to the very man that spearheaded the modern day musical, Jerry Herman.

Jerry’s Girls was created by the man himself and first appeared on Broadway in 1981. Using most of his iconic songs, it is a wonderful homage not only to Broadway but to his genius as a composer and lyricist.  Now running at London’s fantastic St James Theatre in Victoria, this show is a genuine must see for musical lovers. I can’t remember the last time I saw something where I was constantly saying either “Wow!” or “Amazing!” after each number.

Herman worked with some of the all time greats; Ethel Merman, Angela Lansbury, Barbara Streisand and Bea Arthur to name a few, and now stepping into their shoes are Anna-Jane Casey, Ria Jones and Sarah-Louise Young. I found this dynamic trio pure rocket fuel for my senses. All three girls are splendid at commanding the stage and holding us gripped for the full 2 hours. Their vocals across songs from musical elite Hello Dolly, Mame, Mack and Mabel and La Cage Aux Folles are out of this world, goose bump inducing. Anna-Jane Casey, who I had the privilege of meeting during the interval, had me in stitches throughout the show. From performing the splits one minute to a cheeky spontaneous wink and sashay the next, Casey is a theatrical pocket rocket and sheer delight.  Her Song on the Sand was stunning and, in contrast, I Don’t Want To Know left me so moved I was balling my eyes out. Ria Jones is similarly stellar. Her vocals are like rich velvet across the show and her version of I Am What I Am is beyond breath-taking. Sarah-Louise Young is born for the stage and I found her vocals and characterisations spectacular. Both Young’s Take It All Off, accompanied by Jones, and La Cage Aux Folles are comedy gold.

Individually strong, the three girls also work flawlessly as a unit across the bigger numbers like Tap Your Troubles Away, Sunday Clothes and melody mash ups. Sophie Byrne on saxophone needs a special mention, as I’ve never seen someone tap and play an instrument at the same time! Edward Court, on piano and the show’s musical director, sets the tone across the show superbly and his ivory tinkling is divine.

The show is split across themes like Vaudeville, Broadway, movies and Autumn, which sounds confused but works beautifully and allows director Kate Golledge to have a blast. I found the direction of each scene, even the spontaneous ones, natural and so beautifully creative. Having the girls mingle with the audience throughout the show was a lovely touch. The choreography by Matthew Cole is simple, yet powerful and full of fun.

While it could be said there is a music overload, there are also some lovely touching moments of audio clips of Herman himself talking about his inspirations and life that fill the small cabaret venue. As the lyrics of Showtune from Parade attest, ‘There’s just no tune as exciting as a show tune’ and this couldn’t be truer for this simply marvellous show.