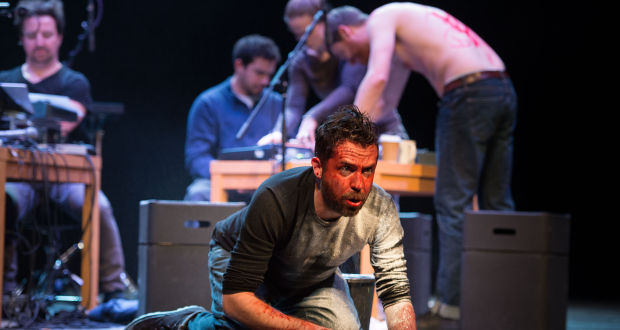 Pros: A strong performance in the title role and a striking, live audio accompaniment combine in a powerful, charged version of the classic.

Cons: Some of the novelty additions are a bit fanciful; the noise of trains overhead is a regular distraction.
Macbeth, The Vaults – Review

Pros: A strong performance in the title role and a striking, live audio accompaniment combine in a powerful, charged version of the classic. Cons: Some of the novelty additions are a bit fanciful; the noise of trains overhead is a regular distraction. The stage onto which Macbeth makes his entrance in this show, part of the 2015 Vault Festival, is not Shakespeare's blasted heath, but a bare room occupied only by two utilitarian tables. Piled on these are arrays of musical instruments and sound machines - keyboards, a theremin, a xylophone, synthesisers, samplers, clock chimes and microphones - at&hellip;

Pared-down Shakespeare is combined with an experimental soundtrack in a production that's brimming over with innovation.

User Rating: Be the first one !
The stage onto which Macbeth makes his entrance in this show, part of the 2015 Vault Festival, is not Shakespeare’s blasted heath, but a bare room occupied only by two utilitarian tables. Piled on these are arrays of musical instruments and sound machines – keyboards, a theremin, a xylophone, synthesisers, samplers, clock chimes and microphones – at which the cast sit when they’re not actively performing (and sometimes when they are). They’re engaged in endless twiddling of knobs and dials, tapping chimes and stroking a violin bow on the xylophone to produce the rich, textural soundtrack that forms the background to the performance.

Some of the dialogue comes from scratchy speakers, but most is spoken by the cast. Initially somewhat declamatory, they loosen up as the play progresses and the tone becomes less stilted and more passionate. Macbeth is played with raw power by the excellent Ferdy Roberts, maturing from his timid beginnings to a towering, haunted murderer literally drenched in blood. Opposite him, Poppy Miller plays Lady Macbeth as a subtle, manipulative figure: the scene in which she removes Duncan’s shirt and draws a heart and target on his bare torso clearly identifies her as the treacherous driving force.

The music both provides the backing and comments upon the action. When Macbeth delivers the words “Is this a dagger I see before me”, the accompaniment is a clock spring being tapped with a knife. But it’s a drawback of the venue that even the loud soundtrack is drowned out by the trains that thunder through Waterloo station, directly overhead, every few minutes. As Macbeth proclaims the lines “Whence is that knocking? How is’t with me, when every noise appalls me?” he casts his eyes upwards, to the timely rumbling of the 7.50 to Guildford.

This is a stirring, devised distillation of Shakespeare’s play that’s full of innovation. Not all of it is uniformly successful; Lady Macbeth setting out a feast of Coca Cola and Wotsits is perhaps just too kitsch, as is her pelting of Macbeth with popcorn. The appearance of Duncan (not Banquo) as a ghost reading from a literary criticism of the play may serve to illuminate the characters’ motivation, but it forms an unnecessary break in the action – although, it has to be said, it’s the only moment of humour in the whole production. But when the innovation works, it works brilliantly: never have I seen a baby monitor put to such poignant use.

You’ll need a thorough knowledge of Macbeth in order to make sense of this production, which makes no concessions towards an audience unfamiliar with the text. Indeed, the plot is printed in the programme. There is some drag in the early scenes, but the second half picks up the pace, resulting in a rewarding and thought-provoking 75 minutes. When this production opened in Bristol last year it did so to uniformly dire reviews. Since then it has changed its lead actor, and has matured to the point where it has become a real pleasure.

Previous: The Eradication of Schizophrenia in Western Lapland, Battersea Arts Centre – Review
Next: Marching On Together, The Old Red Lion Theatre – Review