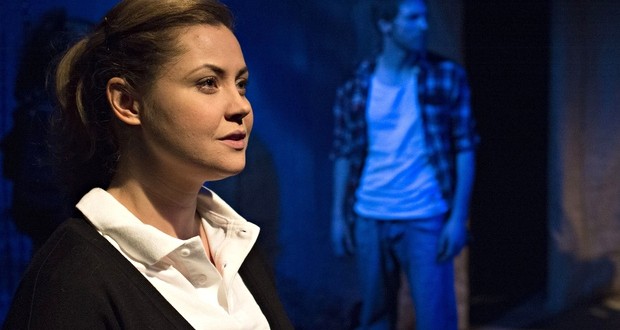 Pros: A tremendous performance from Kirsten Foster. Cons: The male characters feel less developed than their female counterparts. Pig Girl at the Finborough is a story that builds on (and draws heavy influence from) the true-life murder of a great number of prostitutes in Canada at the hands of a man who was went un-pursued for a long time owing largely to police indifference to the missing women. Two narratives take turns telling their version of events. On the edge of the stage stand a worried sister of a missing prostitute and an uninterested and overstressed policeman as they&hellip;

A chilling and unsettling story that is brought to life admirably.

User Rating: 4.6 ( 1 votes)
Pig Girl at the Finborough is a story that builds on (and draws heavy influence from) the true-life murder of a great number of prostitutes in Canada at the hands of a man who was went un-pursued for a long time owing largely to police indifference to the missing women.

Two narratives take turns telling their version of events. On the edge of the stage stand a worried sister of a missing prostitute and an uninterested and overstressed policeman as they go back and forth over his reluctance to take the missing woman case seriously. In centre stage we have a scene from a dirty barn – scuffed dirt and rock floor, bins of junk adorn the floor, and an abattoir hook eerily swings from its chains. In this scene we have an abducted prostitute and her unhinged and creepy kidnapper.

It is absolutely, categorically, not easy viewing. There are some scenes that enact sexual violence, and they are extremely difficult to watch. I felt my own skin crawl every time the killer so much as touched the Dying Woman, and this performance does not sugar coat anything – the violence is not shielded from the audience.

There are some unimaginable horrors being brought to life for this performance, and Kirsten Foster is without question the girl to bring them to life. She is outstanding in this macabre role. Her screams are blood curdling, and she puts in an incredibly physical performance as the abducted prostitute.  Her pain is worryingly believable, and her role in the finale is equal measures intense and tragically beautiful.

Another winning bit of this performance is how multifaceted the majority of the characters are. The sister, the dying woman and the police officer all have many sides each bringing something to the table to enrich the characters. Olivia Darnley is wonderful as the concerned sister who stuck to the straight and narrow; she’s determined, sympathetic, and immensely likeable.

What’s also interesting about the performance is how the two different narratives are moving at completely different speeds of time. One narrative takes place over years, and is cleverly marked as such with monologue diary entries. The kidnapping narrative covers far less time, but the suffering experienced seems to have lasted for years.

There is little to be improved on here, but some lines are fluffed on occasion (which do not seem to be part of characterisation) and I’m not sure if the haunting, recurring knocking which tortures the police officer is as relevant and meaningful as the sister hearing telephone rings at every turn. The police officer as a character overcompensates for how the killings have affected him, but his torment does not seem as valid as the physical and mental torment of that of the sister.

There is no happy ending to be had for this performance, but the ending is moving, powerful, and the cherry on top of an incredible performance from Kirsten Foster. This is an extremely difficult play to watch, even from a safe distance – but it is a powerhouse of a performance, and gives a strong, brave, and concise voice to victims of a madman who was left alone to kill for far too long.