Cons: The ideas were sometimes so raw they felt incomplete and difficult to follow.
Jerks in Progress, Etcertera Theatre – Review

Pros: Original, interesting concepts, no stereotypes or clichés. Cons: The ideas were sometimes so raw they felt incomplete and difficult to follow. The Etcetera Theatre is well known for hosting an array of fringe theatre and comedy. Situated above the lively Oxford Arms, it is a great venue for emerging artists. Lee Griffiths and James Hamilton’s Jerks in Progress fits perfectly into that category. Two established sketch group comedians trying out new solo material. Whilst billed as one show, this was really two contrasting performances awkwardly squeezed into one time slot. Hamilton, who took the first half of the&hellip;

New and bold ideas, but no overall satisfying pay off. For avid fringe fans, but would not work so well for a general audience.

The Etcetera Theatre is well known for hosting an array of fringe theatre and comedy. Situated above the lively Oxford Arms, it is a great venue for emerging artists. Lee Griffiths and James Hamilton’s Jerks in Progress fits perfectly into that category. Two established sketch group comedians trying out new solo material.

Whilst billed as one show, this was really two contrasting performances awkwardly squeezed into one time slot. Hamilton, who took the first half of the show, delivered a series of short pre-written sketches. After this Griffiths, in character as a reluctant host, led the audience in an evening of charity fundraising for the plight of left-handed people everywhere.

There was both a positive and negative side to watching these artists experimenting with new ideas. On the plus side it felt refreshing to witness something completely original.  A showcase of two emerging styles without any hint of a stereotype or a regurgitated cliché. On the other hand, there were moments for both performers when the material felt so raw that it came across as incomplete and was quite difficult to follow.

I felt the strength of Hamilton’s performance was his writing. He had created a set of clearly defined characters and performed them using props, costumes, lighting and sound effects in a very sketch-show style way. I particularly liked the Buckingham Palace guard and Gustav, the curio shop proprietor whose mystical goggles of ‘future-past’ were nicely reincorporated towards the end of the set.

There was a large section however where Hamilton seemed to read entirely from a script. It had initially been tacked to the side of the stage, in an envelope labelled something like ‘for use only in an emergency’. It was difficult to know if this was an intentional gag or a genuine safeguard. Whilst I understand the unpolished style of new and experimental writing, the use of a script felt a bit disappointing, particularly for a paying audience. It certainly changed the dynamics of Hamilton’s delivery, and overshadowed for me what was on the whole an interesting collection of sketches.

In contrast Griffiths assumed just one character for the evening, himself as the coerced host of the charity fund raiser ‘Left-ease’. A parody of the well-known British TV fundraising format. We were led through a whirlwind of spoof pieces; the roving audience camera, the slightly inappropriate charity single, a surprisingly well-choreographed dancing ‘animal’ sequence and even a cameo celebrity appearance by comedian Rachel Parris who was gagged, bound and wheeled on to show her support.

Whilst all of them suited the style, each piece unfortunately felt a bit too contrived and never reached a high point. Nothing felt as funny as the small unplanned moments with the audience which for me, really stole the show. I particularly enjoyed the audience recreation of Band Aid through the use of random celebrity masks and the heartfelt left-handed audience tales of actually having to ‘write with their left hand’. Unpredictable, but well managed by Griffiths, and something which could perhaps be built on for future performances.

Overall, as Griffiths himself commented, Jerks in Progress was perhaps more work than progress. As each act was so different it is difficult to summarise the show as one cohesive performance. There were some gems of ideas in each of the sets, which with refinement I believe could become strong standalone pieces. Personally the style did not work for me, it felt more unrehearsed than experimental. If however you are an avid fringe comedy fan the rawness of the material might be exactly what you are looking for.

Written and performed by: Lee Griffiths, James Hamilton
Booking Until: One off as part of the Black Box Festival. James Hamilton performs his set again with double act Adam and Lydia on 18th January.
Box Office: 020 7482 4857
Booking Link: http://www.etceteratheatre.com/index.php?id=7

Previous: Lest we forget
Next: One Festival (Programme A), The Space – Review 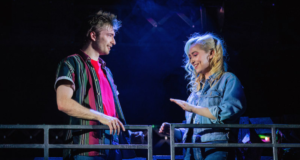 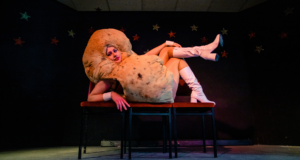 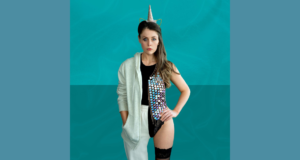