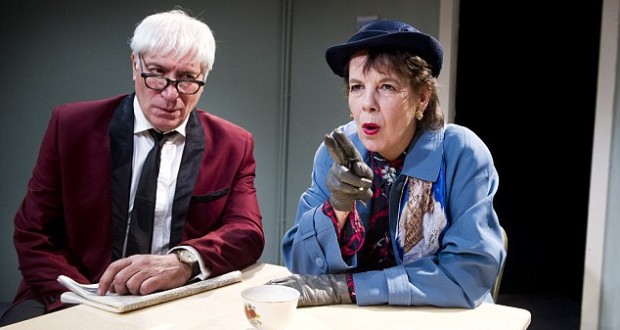 Pros: These two short plays are excellently performed by older actors and give a voice to issues often overlooked in theatre, where the focus is usually on younger people.

Cons: Both pieces feel like parts of longer plays. Each could have gone into much more detail, which would have had a stronger impact.
Ivy & Joan, Jermyn Street Theatre – Review

Pros: These two short plays are excellently performed by older actors and give a voice to issues often overlooked in theatre, where the focus is usually on younger people. Cons: Both pieces feel like parts of longer plays. Each could have gone into much more detail, which would have had a stronger impact. Ivy sits in the staff canteen at the hotel where she lived and ran a cocktail bar for 40 years. She whiles away the time before a bus will take her to a new life in her friend Inky’s spare room after losing her job, pontificating&hellip;

These two unrelated one-acts focus on older women on the verge of huge life changes. Both pieces could have been more powerful as full-length plays, and the long monologues often come across as complaining.

User Rating: 0.75 ( 1 votes)
Ivy sits in the staff canteen at the hotel where she lived and ran a cocktail bar for 40 years. She whiles away the time before a bus will take her to a new life in her friend Inky’s spare room after losing her job, pontificating to Vic, who is there to ensure she boards that bus and leaves for good.

Joan sits at her kitchen table with husband Eric, reminiscing over their recent holiday to Venice. Eric is annoyed at her constant mispronunciations whilst Joan romanticises their experiences. They are both waiting for taxis. Eric’s will take him to a new job near his mother’s and Joan’s will take her back to a psychiatric facility where she is receiving treatment for an unstated mental illness.

The production consists of two separate one acts featuring the same performers, Lynne Miller and Jack Klaff. Both are seasoned performers and excellent to watch. James Hogan’s scripts focus almost completely on the female characters, which showcases their issues, but the near-monologue format is often repetitive and one-note. Both plays certainly address important issues but could have been investigated more in-depth if they were full-length and featured more of the male perspective. By including more of the masculine counterpoint, the women’s voices would better highlight the offences against them rather than coming across as moaning or daydreaming.

Both Ivy and Joan are victims of their age and gender. Ivy is being replaced by 18-year-old ‘Little Miss Button Missing’ who flirted her way into the job. Though she did herself no favours by speaking to her boss rather rudely, it’s impossible to escape the feeling that she was forced out, even if her character isn’t particularly likeable. Vic lets her prattle on about the kids these days and Harry, a waiter who Ivy rendezvoused with many years ago. Even though she mostly comes across as a bitter old gossip, it’s easy to feel pity towards her unrequited love and longing for the good old days. Vic’s mostly quiet patience varies from moment to moment, but the world is moving too fast for these two. It’s only a matter of time until Vic falls victim to the same fate.

Joan is an artist and writer about to return to a mental health facility from which she was released for her holiday. Whilst in Venice, she connected with a mysterious tour guide, Signore Dottore Marcello di Eduardo, who has captured her affections. Husband Eric cannot stand her romantic wittering, but is mostly quiet as they wait for the respective taxis. Joan is middle-class, sensitive and has the soul of a tortured artist. There is the feeling that Eric committed her to hospital ‘for her own good’ and he is glad to be rid of her.

There is little action in either play. The writing style is akin to Chekhov or Bennett. There are some lovely moments of witty bantering, but these are few. Despite outstanding performances, the playlets feel underdeveloped.

Previous: Just Like That! The Tommy Cooper Show, Museum of Comedy – Review
Next: HVI: Play of Thrones, Union Theatre – Review