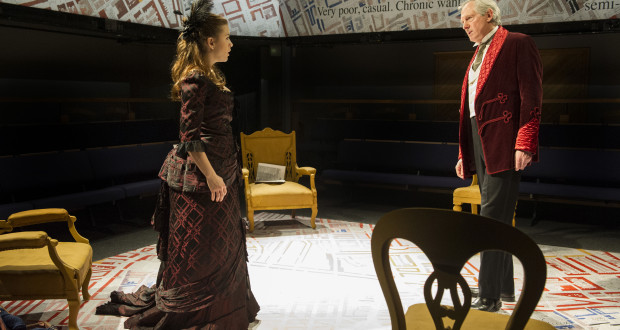 Cons: A little slow to start, but it soon picks up speed.
Widowers’ Houses, The Orange Tree Theatre – Review

Pros: Bernard Shaw’s writing meets Miller’s direction in this sparkly, fun and poignantly modern play. Great acting and a wholly entertaining plot. Gives you even more reason to loath Estate Agents. Cons: A little slow to start, but it soon picks up speed. Having discovered myself to be a fan of Bernard Shaw’s turn of the century plays, I was very much looking forward to the one that the 1925 Nobel Prize laureate himself described as ‘probably the worse I ever wrote’. Rarely performed these days, it is part of the ‘unpleasant plays’ series, together with other socialist crowd-stimulators&hellip;

A really enjoyable production of one of Shaw’s least celebrated plays. Entirely successful and highly recommended!

Having discovered myself to be a fan of Bernard Shaw’s turn of the century plays, I was very much looking forward to the one that the 1925 Nobel Prize laureate himself described as ‘probably the worse I ever wrote’. Rarely performed these days, it is part of the ‘unpleasant plays’ series, together with other socialist crowd-stimulators such as The Philanderer and Mrs Warren’s Profession.

And yes, just as I hoped for, Widowers’ Houses explores and derides Britain’s fascination with let-to-buy offers of shabby pads in Central London for exorbitant prices, long before Gumtree was even conceived. Written in 1892, this play is buoyantly contemporary, poignantly accusatory and, most importantly for us theatre-loving folks, jolly good fun to see on a Winter’s eve!

In this production for the Orange Tree Theatre, everything is in the details. Designed by Simon Shaw, the sets are minimalistic but fitting. We start by seeing young and boisterous Dr Harry Trench (Alex Waldman) and his immediately likeable companion Mr Cokane (Stefan Adegbola) having a good time on holiday in a French Café. As fiery, young Blanche (Rebecca Collingwood) and her intimidatingly elegant father Mr Sartorious (Patrick Drury) make their appearance, the romance is bound to start – not without some well-timed humour and mysterious dalliance. But as they return to London, the couple will have to face the reality of what they truly are – wheels in a mechanism that exploits and humiliates the poor to keep profits flowing for the wealthy landlords. Bernard Shaw’s openly provocative plot ties Harry’s love for Blanche with his deepest moral dilemmas. When rent collector Mr Lickcheese, vividly played by Simon Gregor, reveals the true nature of Mr Sartorius’ wealth to the aspiring groom, the aristocratic but poor young doctor faces the dilemma of choosing love over values. And no, I’m not going to tell you which way he ends up leaning!

Paul Miller’s direction manages to bring this underrated play from the old master into the 21st century. He gets everything right, from the use of the three–sided open stage of Shakespearean tradition, to the choice of actors, right down to the tempo and use of space. All actors deserve praise: Collingwood’s Blanche rises up to her debut pro performance and is supremely endearing in her elegant flirtatiousness, turning proud and vengeful when the tide changes. Waldman’s Harry manages a rather difficult transition to grown-up landlord seamlessly. Drury’s Sartorius gives the stage weight and balance, while Adegbola’s Cokane turned a potentially frivolous character into the life and soul of the party.

What Miller couldn’t change was some lightness of the plot itself, especially in the first act when too long may have been spent in developing the storyline. However, this is an eminently enjoyable play to watch and it is a well-directed, well-delivered and well-conceived piece of theatre. Go watch.