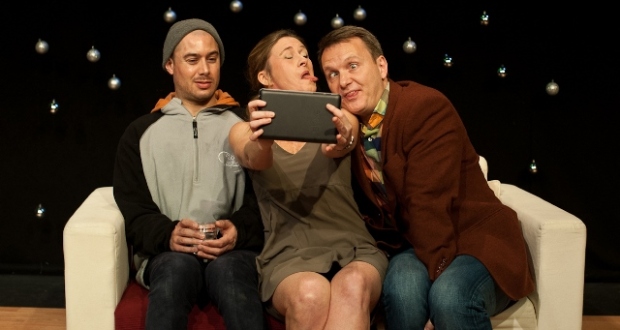 Pros: Full of hilarious one-liners and an energetic cast, this show addresses serious social issues without bringing the audience’s mood down in the process.

Cons: One-liners aren’t always enough and the substance of the play is sometimes compromised in the second half.
Sheltered, Tabard Theatre – Review

Pros: Full of hilarious one-liners and an energetic cast, this show addresses serious social issues without bringing the audience's mood down in the process. Cons: One-liners aren't always enough and the substance of the play is sometimes compromised in the second half. This production at the Tabard Theatre marks the world premiere of Greg A. Smith's black comedy about homelessness and class prejudice in London. Set in a household in Turnham Green on Christmas Day, the play focuses on middle class couple Harry (Mike Duran) and Tamsin (Nikki Squire) and their rebellious daughter Jenna (Phoebe Batteson-Brown), who have welcomed&hellip;

Featuring a witty script, Sheltered's central message about homelessness can sometimes lose its way for the sake of a joke, but it's ultimately an original black comedy.

This production at the Tabard Theatre marks the world premiere of Greg A. Smith’s black comedy about homelessness and class prejudice in London. Set in a household in Turnham Green on Christmas Day, the play focuses on middle class couple Harry (Mike Duran) and Tamsin (Nikki Squire) and their rebellious daughter Jenna (Phoebe Batteson-Brown), who have welcomed a homeless man into their home for the holidays. It soon becomes apparent that this is a yearly tradition for the family who are seemingly carrying out a random act of kindness.

Located within the courtyard of The Tabard pub, the theatre is a cosy, intimate performance space. Comfortable seating with ample leg space left me quite impressed with the venue, as did the staff. For this production, the small stage was set up to look like a suburbia living room with a cheery looking Christmas tree.

It seemed like this would just be a cosy, if slightly eccentric drama about a family taking in a “tramp” for Christmas. For this section of the play, the slight peculiarities of the situation worked well with the intentionally shallow characters to produce quite a light-hearted, enjoyable production. Although, admittedly the couple’s over-eager attitude combined with mentions of their previous “guests” not returning after Christmas Day did start to set off alarm bells in my head.

However about half way through the play, when a second homeless man, Den, is introduced, things start taking a turn for the ridiculous and Harry and Tamsins’ simple motivations start to become a little stale rather than funny. It’s soon explicitly relayed to the audience that the two homeless men have been brought in as part of a wager between Harry and his friend Donald, who place bets on which of their homeless pair will win in a fight to the death. The idea of an otherwise seemingly normal middle class family with a teenage daughter welcoming this sort of violence into their house just seems a little too absurd for me to grasp. At one point the inevitable happens and Jenna becomes endangered by one of the guests. An unnecessary fight scene in which Den coughs up blood as if it were an afterthought, adds to the absurdness of the play’s action.

Still, Sheltered does have its redeeming qualities. The script is full of funny one-liners that are particularly effective at the beginning of the play during the fast-paced dialogue between Rory and his hosts, with the latter making numerous funny little hints at their cluelessness concerning their guest’s way of life.

Also the ridiculousness of the play and the shallow nature of most of the characters leaves Michael Longhi (Rory) shining as the only (and I think intentionally) truly genuine character in the play. His tearfully distraught reaction to the real purpose of his visit is hard to watch – in a good way – and he provides vital substance and acts as a moral compass. Sarah Hannah, who plays Donald’s suffering, abused wife Marissa, also deserves a shout out for sending pangs into the hearts of the audience with the tortured melancholy that lies underneath her humorous performance.

Funny, witty and original (if bizarre), Sheltered is a great piece of black comedy that seeks to highlight issues of homelessness and domestic violence. Although it does lose its way for the sake of cheap laughs and shocks at times, I can only commend a play that seeks to bring attention to such an important issue during the festive period.