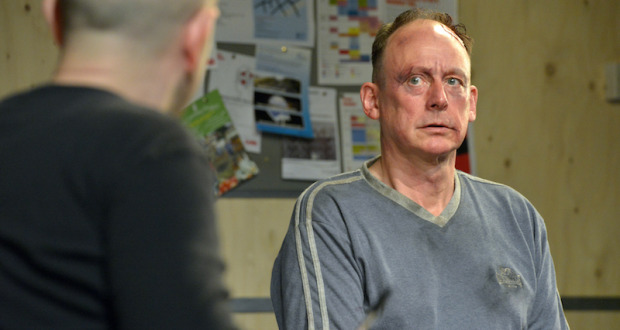 Cons: The ushers of the Soho Theatre could’ve been on hand more to stop the barrage of distracting late comers.
Wet House, Soho Theatre – Review

Pros: Superb ensemble cast, original script and a few shocks Cons: The ushers of the Soho Theatre could’ve been on hand more to stop the barrage of distracting late comers. It's been a while since I've seen a play that has shocked and surprised me but Wet House, the award winning play from Paddy Campbell, did just that for all the right reasons. It's billed as a comedy, and although extremely funny in parts, it's far darker and more sinister than you'd expect. A wet house is a hostel for chronically alcoholic and homeless men and women and is&hellip;

A strong cast weave a comedic and dramatic tale that has more twists in it than a corkscrew in a bottle of plonk!

It’s been a while since I’ve seen a play that has shocked and surprised me but Wet House, the award winning play from Paddy Campbell, did just that for all the right reasons. It’s billed as a comedy, and although extremely funny in parts, it’s far darker and more sinister than you’d expect.

A wet house is a hostel for chronically alcoholic and homeless men and women and is the setting for this incredible play. As a South London cyclist I’ve often found myself waiting at the traffic lights next to the shelter in Vauxhall and, if the curtains were open, found myself staring through the window at all the characters inside and wondering who they are and their individual stories. This original play, currently running at the wonderful Soho Theatre, touches on these stories.

There are only six members in the cast of this production and all give strong stand out performances. Riley Jones as Andy, the idealistic young graduate who is starting his first shift at a Newcastle wet house, is superb. As the comedy descends into darkness I found myself rooting for Andy at every turn, as the things he’s exposed to on his first couple of days on the job are harrowing.

Then comes Mike, the psychotic ex soldier (it’s still a comedy I promise!), who is played outstandingly by Chris Connel. From the beginning Mike, for me, was going to be the comedy’s hero as his one-liners and fast jokes had us in stitches, but how wrong I was. As the plot shifts, with a twist that none of us saw coming, Connel’s characterisation of this troubled soul gripped me and I thought he was outstanding.  The relationship between both Andy and Mike, although flawed and extremely dangerous, is held together by fellow wet house colleague Helen, played wonderfully by Jackie Lye.

Clearly no wet house would be complete without its occupants and these come in the form of alcoholic Dinger, a paedophile called Spencer and Kerry the pregnant teen. Still a comedy I promise. Joe Caffrey as Dinger has to be one of the most compelling performances by an actor I have ever seen. Caffrey’s Dinger is vulnerable, compassionate and annihilated from the outset and his subtle nuances throughout his performance across the play are stellar. It’s no wonder he received the Performance of the Year award last year.

Simon Roberts, who is new to the cast and took on the role of troubled paedophile Spencer, was outstanding. Due to the significant twist in the plot, I found some of the scenes with Spencer so hard to watch as they made me feel so uncomfortable and this is a testament to Roberts acting.  Eva Quinn, as the self-loathing and fragile Kerry, is also superb and I found some of her scenes, especially with Helen, beautifully moving and disturbingly violent.

Watching all six of these diverse characters battle their demons is mesmerising theatre at its very best. You never felt disconnected from the story – apart from the constant flurry of latecomers being ushered in. Max Roberts direction across every single scene really stood out for me. From the subtle pauses with humour and deep emotion to some of the more violent scenes, is remarkable.

Wet House touches on some seriously hard-hitting topics like alcoholism, bullying, loneliness, insecurity, violence and the holes in the care system. None of which are funny, yet Campbell’s script weaves around theses dark themes with ease and razor sharp wit. Although tinged with sadness and tragedy, Wet House asks the very simple question: how do you keep your head when everyone else is off theirs?