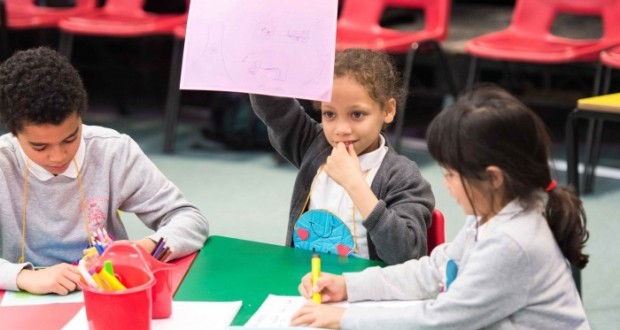 Pros: Highlighting an important current issue in education, God Bless the Child has a diverse range of characters who cleverly pick apart the tensions of the modern day classroom.

Cons: Davies can be a little too didactic at times which can make the central concept seem a little too obvious and not complex enough in its portrayal.
God Bless the Child, Jerwood Theatre Upstairs – Review

Pros: Highlighting an important current issue in education, God Bless the Child has a diverse range of characters who cleverly pick apart the tensions of the modern day classroom.  Cons: Davies can be a little too didactic at times which can make the central concept seem a little too obvious and not complex enough in its portrayal. Molly Davies' God Bless the Child shows a school in turmoil. Low in funding and desperate, headmistress Ms. Evitt and 4N's teacher Ms. Newsome resort to integrating a new behavioural technique championed by famed author Sali Rayner that uses children's character 'Badger&hellip;

This dark satire that pits reputation against educational progress is an unsettling but effective production.

User Rating: Be the first one !
Molly Davies’ God Bless the Child shows a school in turmoil. Low in funding and desperate, headmistress Ms. Evitt and 4N’s teacher Ms. Newsome resort to integrating a new behavioural technique championed by famed author Sali Rayner that uses children’s character ‘Badger Do Best’ to show exemplary behaviour, pitting funding against educational progress. However, it doesn’t take long for one of the children – Louie – to see beyond Badger’s lessons and subvert the system for her own benefit, using her storytelling skills to rule over the other children and undermine her teachers, and becoming the adults’ worst nightmare in the process.

Found on one of the upper floors in the Royal Court Theatre near Sloane Square, the Jerwood is a small but very effective theatre space. Special attention has been paid by designer Chloe Lamford to ensure that the audience feel they’ve been transported into a school classroom. Even before you enter the theatre itself you walk through a corridor decorated to resemble a children’s cloakroom and upon entering performance space you’re met with a perfect replica of a primary school classroom, complete with a book corner, paintings and educational posters. Seating is arranged around the edges of the room and it’s worth noting that after entering you can’t leave again until the end of the 1hr 45minute play.

From the moment you enter the theatre, the cast are in character, with the children sat excitedly working at their tables and going up to ask Ms. Newsome questions. God Bless the Child opens with the teacher reading a loud a ‘Badger Do Best’ story – a sickeningly sweet woodland tale about doing good deeds – to the eager young listeners. It soon becomes apparent that the character features heavily throughout the classroom, with the children in almost of obsessive awe of it and using Badger to resolve conflicts in the classroom. Perhaps this encouragement of the pupils to indulge in this fantasy can be blamed for their later rebellion.

I was particularly impressed by the calibre of the young child cast, all of whom showed great enthusiasm for their roles. They did a fantastic job of making you laugh with their cute ways one minute and unsettling you by beheading badger toys the next and driving their teacher to madness. Ms. Newsome (Ony Uhiara) gives a worthy performance as a teacher pushed to the limits. She knows deep down that the ‘Badger Do Best’ system needs readjusting to continue engaging the students and yet she is constantly being reminded not to worry because it’s the system being assessed not herself. Her frustration at the school’s attempts to balance impressing inspectors with what’s beneficial for the children’s education is very reminiscent of the issues faced by my own teacher friends.

Having read nothing about the play beforehand I was also pleasantly surprised when Amanda Abbington (Sherlock, Mr Selfridge) walked in as populist child psychologist Sali Rayner! She was deliciously egotistical as the founder of the ‘Badger Do Best’ system, going so far as to tell Louie to think of her as her ‘fairy godmother’ and patronising both the children and their teachers.

My one criticism would be that the concept of the play fell a little flat at times. It often felt too obvious and although I think the issue is an important one to highlight, I think Davies could have been a little more subtle and creative in how she communicated this to the audience.

Unfortunately the performance I attended had to be cut short by illness amongst the cast and although there were only 15-20 minutes to go I honestly can’t tell how the play was going to pan out. It was such a gripping performance that I’m finding it really frustrating to not know whether the children or the adults prevail but hopefully this is something you’ll be able to find out for yourself! Engrossing from the get go and featuring a cast who can make you laugh as much as they can unsettle you, God Bless the Child is a dark satire that’ll leave you trying to process your thoughts long after the play is over.