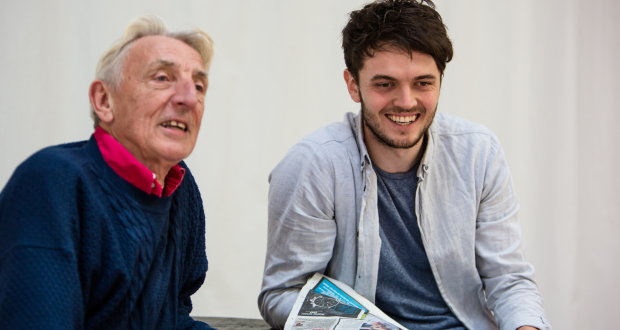 Pros: Some terrific performances, and the tone and atmosphere are just right.

Cons: The show is sluggish in places with no real tension to keep the audience engaged.
Coolatully, Finborough Theatre – Review

Pros: Some terrific performances, and the tone and atmosphere are just right. Cons: The show is sluggish in places with no real tension to keep the audience engaged. Coming from an Irish family, I have spent all my life around a large Catholic family that spend most of their time talking about the past. It is this reflective, nostalgic attitude that Coolatully captures so well. Coolatully, a forgotten town somewhere near Cork, is being cleared of its young men, one hurling position at a time, as they go off in search of work and a better life in Australia&hellip;

An impressive show, but a thorough tightening of the plot is required.

User Rating: 2.3 ( 1 votes)
Coming from an Irish family, I have spent all my life around a large Catholic family that spend most of their time talking about the past. It is this reflective, nostalgic attitude that Coolatully captures so well. Coolatully, a forgotten town somewhere near Cork, is being cleared of its young men, one hurling position at a time, as they go off in search of work and a better life in Australia and New Zealand.

To me they are very familiar and real, these lost areas of rural Ireland and the lost souls who inhabit them, either because they are too stubborn to leave like our protagonist Killian (Kerr Logan), too poor like Killian’s best mate Paudie (Charlie de Bromhead) or too old and set in their ways like Jim (Eric Richard). But in Coolatully, Killian’s girlfriend Eilish (Yolanda Kettle) is heading off for Sydney and Killian is about to get left behind if he doesn’t get his act together. I spent the play wanting to shake Killian as he tries to figure out whether he should get out or not.

Logan has some remarkable moments where his frustration at his situation and that of those around him manifests itself in physical outbursts of anger. A particularly powerful part has Killian pick up an old hurling stick, a sport he has left behind, and act out scoring the winning goal in the All Ireland Final. Although there are some slips in his accent, Logan carries the play well, even if Killian is a maddening character to deal with.The real star turn comes from stalwart of the stage and screen Eric Richard, who plays Jim with a wonderful and touching sensitivity. The variety in his performance is something quite magical to watch.

The problem isn’t really in the performances, though a few extra rehearsal hours on accent wouldn’t have gone amiss: it’s in the plot. When a play runs for over ninety minutes without interval, it sets itself a tough task to keep the audience engaged. And it is halfway through that the play begins to meander slightly, drifting along with the characters, which makes it hard to maintain interest.

This is especially problematic when there isn’t really any jeopardy in the story. Killian has nothing really stopping him leaving the ghost town that his home is becoming for the golden sands of Bondi beach, and for all his faults and mistakes, he is never in danger of being punished. Obviously this leaves room for internal conflict, which is played out well, but since the play wholly depends on this internal struggle without much happening on the outside the pace is rather slow.

Designer Max Dorey effectively creates the domestic spaces of Jim’s house and Killian’s family pub, with the ever-present spectre of Killian’s brother manifested in his grave in the corner. The scenes flow into each other easily, though for the love of God, someone needs to oil the bolt on the door. The only issue here is the fussiness of the props; an Irish Times that only gets used for one line and sticks out like a sore thumb, a radio that might as well not be there and crisps that get everywhere and force actors to do awkward onstage clean ups mid-scene. There is such a strong, simple symbolism in the set pieces and it’s a shame this philosophy isn’t carried through to the props.

The peculiarly Irish sense and sensibilities are perfectly captured in this piece and, combined with the performances, generate an interesting piece of theatre. However, the story ambles along for so much of the second half that they are in danger of losing the magic they work so hard to create in the beginning.

Previous: Dead Arise, Camden People’s Theatre – Review
Next: Who Do We Think We Are?, Southwark Playhouse – Review