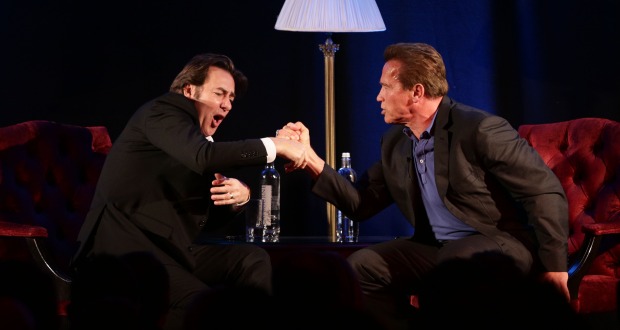 Pros: A vast collection of memorable anecdotes and hilarious quotes from a true legend of cinema.

Cons: Poor set-up and organisation on the part of the event hosts.
An Evening With Arnold Schwarzenegger, Lancaster London Hotel – Review

Pros: A vast collection of memorable anecdotes and hilarious quotes from a true legend of cinema. Cons: Poor set-up and organisation on the part of the event hosts. I arrived at the Lancaster London hotel a bundle of excitement, knowing I was about to see one of my childhood heroes in person. The “intimate” affair was set to play host to around 1,100 people, and I soon found myself within a heaving swarm of fans, body builders, and what I can only assume were so-called ‘glamour models’. I was slightly perturbed by the set-up, as sitting any further back&hellip;

Though at times overly reverent, this was an unforgettable and even inspirational experience.

I arrived at the Lancaster London hotel a bundle of excitement, knowing I was about to see one of my childhood heroes in person. The “intimate” affair was set to play host to around 1,100 people, and I soon found myself within a heaving swarm of fans, body builders, and what I can only assume were so-called ‘glamour models’. I was slightly perturbed by the set-up, as sitting any further back than the fifth row made seeing the stage through a forest of heads fairly impossible, but as I was nearly the back anyway I decided to stand behind the seating, notebook in hand. Perfect… I was ready.

After the start of the event had been delayed by over half an hour, the event host announced (after a moment of confused headset chatter) that the talk itself would be preceded by a performing by electronica band Cosmic Sect. Despite a few technical issues (with the band looking more annoyed than anyone), they played a rousing version of the theme from The Terminator. The host returned, and called upon the audience to welcome the arrival of Jonathan Ross, who would be conducting the interview. After the round of enthusiastic applause had died down and ‘Wossy’ had failed to appear, the host nervously announced that he was delayed. There followed an excruciatingly awkward period of time-wasting, as the host first asked, “So…who have we got here tonight? Where’s everyone come from?” followed by several bad impressions of some of Arnie’s famous catch-phrases. Ross finally arrived and first introduced a montage video of Schwarzenegger’s numerous achievements, narrated by the man himself.

The Governator, looking damn good for his 67 years of age, was predictably greeted with a rapturous standing ovation when he stepped onto the interview platform. After taking his seat, Ross began by asking him about his first love, that of professional bodybuilding. Arnie spoke of his deep admiration for legendary bodybuilder Reg Park – “THE guy I looked up to” – with whom he development a close father/son-like relationship, and about his fondness for London, the city where he won his first of five ‘Mr Universe’ titles at the age of 20 (becoming the youngest man to ever achieve this feat). There followed a brilliant anecdote about him accidentally driving a tank backwards through a building at the age of 18 during his compulsory military service in Austria, the subsequent spell in solitary confinement, and his superiors’ great relief when he asked them if he could quit early to pursue his bodybuilding career.

The conversation eventually turned to his film career, the trials and tribulations of becoming a leading man with his unconventional look and accent, and his eventual breakthrough success with Conan the Barbarian (he recalled director Marcus Nispel once saying, “If we didn’t have Schwarzenegger [for Conan] we would’ve had to build one”). It then jumped back in time to his life growing up in post-war Austria, where his mother was forced to beg for food and where he and his brother were frequently beaten by his disciplinarian father (himself a policeman). “They wanted me to marry a girl called Heidi and have five kids”, he quipped, but he had bigger plans. He recalled his mother crying at the sight of posters of oiled, muscly men on his walls, asking aloud, “Where did I go wrong?” He trained intensely before, during and after school, determined to make use of every waking hour, despite his parents’ lack of approval and support. Incidentally, in response to the notion that six hours sleep a night wasn’t enough, he declared as only Arnie could, “Just sleep faster”.

After watching him win his third ‘Mr Olympia’ title in Essen, Germany, Schwarzenegger’s father told him he finally understood all the hard work he had done, bringing a positive note to their relationship before the former passed away two months later. His mother continued to support him in all his ventures up until her own death – during dinner at the Whitehouse when he was chairman of the President’s Council on Physical Fitness and Sports, Arnie fondly recalls her swatting his hand and telling him off for picking his nose (he still denies he was).

Ross then changed the subject completely, bringing up Schwarzenegger’s legendary rivalry with fellow action star Sylvester Stallone and cheekily asking whether it had been real. Arnie’s response was perfectly deadpan: “…Yes…I hated the son of a bitch.” It was a glorious example of the sense of humour he displayed throughout, and everyone (myself included) hooted with appreciative laughter. He continued his light-hearted tirade, recalling throwing darts at Sly’s picture, the competitiveness of who was killing more people and the most unique ways in their respective films, and responding to reporters asking, “What do you think of Sly’s new movie?” with a declamatory, “It’s shit!” They eventually buried the hatchet when they both became key investors in ‘Planet Hollywood’, and whilst promoting it in Cannes they memorably photographed waltzing together (Arnie couldn’t resist one last dig: “I was of course leading…”), and he voiced genuine affection when recalling Stallone’s support in largely liberal Hollywood when he ran for the Californian governorship as a Republican candidate.

Talk returned to his movies, and Arnie treated us to several choice bits of trivia and news on future projects. He revealed that Twins had originally been called The Experiment, but that given his Austrian heritage and the legacy left by the Nazis it may have drawn some unfortunate associations. Ross referred to The Terminator  and Terminator 2 as the films most people thought of in relation to him, to which he responded mock-aggresively, “What about [Terminator] 3?” Laughing this off, he referred to the arguments he had with director James Cameron over what would become one of, if not THE most celebrated cinematic line of all time: “I’ll be back”; he had wanted to say, “I will be back,” instead, but Cameron was (thankfully) able to convince him otherwise. He then indulged the masses with certainly my most favourite line, loudly bellowing, “GET TO THE CHOPPER!” to raucous cheers. He also confirmed that, following his upcoming return as the T-800 in Terminator 5, there would indeed be upcoming sequels to both the Conan franchise and Twins (the later creatively named Triplets). There were even rumblings, he said, of a follow-up to The Running Man…

A large part of the interview involved Schwarzenegger talking up his own achievements, and while at times he sounded rather self-congratulatory, one felt he had more reason to be than most. His achievements in sports, film and politics are legion, and regardless of how one might feel about any of these achievements or indeed about him as a person, hearing him speak one can’t help but admire his self-belief and strength of character. He also showed enough humility to speak, however briefly, about his failures. Junior was mentioned in the same breath as “toilet” to much amusement, but he also spoke about a certain event in his personal life (the affair, subsequent lovechild, and recent divorce, though the first two were not mentioned explicitly) as being “one of my biggest failures”.

Ross then opened the floor up to questions from the audience. Aside from the all-too-predictable slew of non-questions and declarations of love and admiration (which Ross did admirably well of quashing), there was several enjoyable and interesting highlights. An extremely nervous young Irishman eventually managed to stammer out, “Umm…have you seen Die Hard?” which he managed to follow up with, “Do you think Bruce Willis is awesome?” He had clearly intended to draw Schwarzenegger into some sort of defamation of the notoriously difficult Willis (and was utterly overwhelmed by the task), but Arnie playfully responded with a simple, “Bruce Willis is really awesome,” and that ended that. Another question lead to him revealing that he had been offered roles in both The Rock and Face/Off which he had turned down (he didn’t see how the latter could possibly have worked with him in it) and had regretted both decisions since. He also spoke with great passion both of his crusade for environmental preservation and of how he felt that bodybuilding, though now apparently the second biggest sport in the world, was moving in the wrong direction (i.e. away from physical beauty and perfection as a goal).

The whole interview had had the feel of a motivational masterclass at its core, and Schwarzenegger seemed determined to leave his audience with a positive message – that of needing a clear vision in order to achieve. Looking out to his adoring fans, told them to ignore all naysayers, and demanded that they ask themselves: “What is it that YOU want to do?” After one last anecdote about accidently breaking Barbara Bush’s leg whilst tobogganing with George W Bush at Camp David, it was eventually time for the man to make his departure. Ever the crowd-pleaser, he signed off the only way he possibly could: “I’ll be back.”