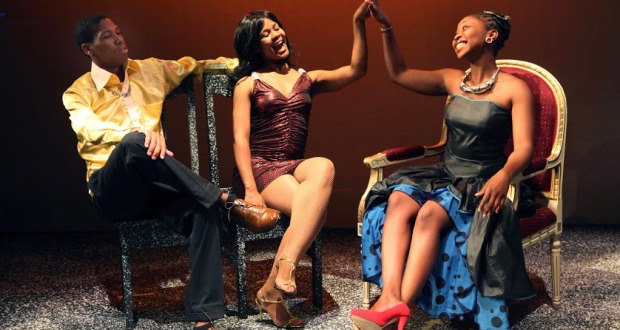 Pros: A sharp script provides real insight to vexed issues facing South Africa. Cons: Two hours of social and political analysis often felt like a lecture. I arrived to the Stratford Circus to be immediately serenaded by The Soil, an excellent a cappella group from Soweto. The trio was midway through a set in the theatre foyer as part of the Afro Vibes Festival, which also hosts Rhetorical. I was immediately buoyed by the atmosphere they generated and my expectations were high. The play examines the speeches of Thabo Mbeki, who succeeded Nelson Mandela as president of South Africa in&hellip;

An intelligent examination of speechmaking and the power of oratory.

User Rating: Be the first one !
I arrived to the Stratford Circus to be immediately serenaded by The Soil, an excellent a cappella group from Soweto. The trio was midway through a set in the theatre foyer as part of the Afro Vibes Festival, which also hosts Rhetorical. I was immediately buoyed by the atmosphere they generated and my expectations were high.

The play examines the speeches of Thabo Mbeki, who succeeded Nelson Mandela as president of South Africa in 1999. It considers Mbeki’s precarious situation as he followed one of the most renowned acts in political history as a relative unknown, despite his involvement with Mandela’s administration. The play also asks us to consider if the political climate put Mbeki in a lose-lose situation, and if Mandela’s success had much to do with being in the right place at the right time.

An exposition of Mbeki’s career begins with a film clip featuring the man himself. Frequent use is made of the video screen, introducing the date and location of key speeches and for contrast, clips of history’s most effective orators. Sello Zikalala plays Mbeki, guiding us through the leader’s quest for the hearts and minds of the people. Book smarts secured political power but not necessarily the wealth; intellect doesn’t put food on the table and selected speeches chart his attempts to close the gap; whether between black and white or wealth and poverty.

An early speech focused on the ills of a divided nation. This was quickly followed by clips of Winston Churchill, Adolf Hitler and inevitably, Martin Luther King Jr.’s ‘I Have a Dream’ speech. All basically explored the same theme of ‘one nation’. Obviously, the end product varied according to the orator’s motivation, but the basic principles of communication don’t change. Mbeki was talking to the people but was he as effective as Mandela? Struggles between the pair were cleverly illustrated when they shared a podium and microphone. Manyesta Ontireste does a brilliant portrayal of Mandela, before he is interrupted by Mbeki, wrestling the microphone away to make a speech of his own. Mandela fights back and neither gets their message across. As a piece of physical comedy it was very well done, but also makes a serious point; who was really pulling the strings?

As Mbeki’s presidency draws to a close, his battles with deputy Jacob Zuma have taken their toll and he ponders his achievements in office. A sequence portrays Mbeki donning the garb of other African politicians; President Mobutu of Zaire, Colonel Gaddafi of Libya and Robert Mugabe of Zimbabwe. This begs the question: what type of leader did South Africa really want?

Artistically and creatively Rhetorical hits all the marks. It should also be recognised as a valid study of the post-Mandela landscape. However, it was far too academic for me to feel entertained by it. It’s plain that South Africa is still healing wounds caused by Apartheid and the play raises more questions than it answers. Nevertheless, I felt educated by the experience.