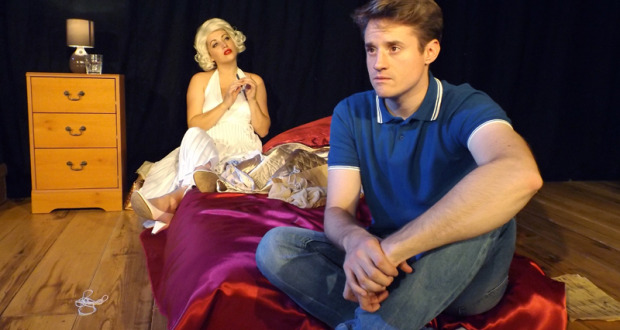 Pros: The intriguing plot, with so many twists and turns throughout, leaves you guessing right up until the final moment.

Pros: The intriguing plot, with so many twists and turns throughout, leaves you guessing right up until the final moment. Cons: There were a few line slipups and weaker moments, causing the narrative to occasionally feel stilted. The King’s Head Theatre is London's oldest theatre pub and its shabbiness is part of its charm. With play posters and actors’ portraits adorning the pubs walls, it sets the scene for a great show. The play was preceded by a member of the theatre’s staff asking for support; it is clear that small theatres, without any external funding, rely on the&hellip;

This is a great play, and with a more polished cast and less audience disruptions, it could really be something special.

The King’s Head Theatre is London’s oldest theatre pub and its shabbiness is part of its charm. With play posters and actors’ portraits adorning the pubs walls, it sets the scene for a great show. The play was preceded by a member of the theatre’s staff asking for support; it is clear that small theatres, without any external funding, rely on the support of their audiences to survive.

Hello Norma Jeane is set in the motel room of Lynnie, a woman in her 70s who is convinced she is Marilyn Monroe. She tells her grandson, Joe, that she faked her own death and moved to Essex. We join Lynnie in the LA motel room she is staying in, having just escaped her nursing home in Essex. Joe arrives and confronts her about her escape and Lynnie explains her plan to reveal her true identity. It also just so happens that Marilyn Monroe is Joe’s idol. At first this sounds frankly ridiculous, but as the plot develops, questions and doubts start to contradict themselves. Could this old woman really be Marilyn Monroe?

The plot took a while to develop and the first half of the play was quite slow. I did at one point find myself wondering what time it was, which I always take as a sign that the play isn’t as engaging as it should be. There were a few line slipups from Lynnie (Vicki Michelle), and other cast members’ lines felt occasionally forced, all of which broke up the narrative slightly. However, there were some very funny and tender moments, particularly between Lynnie and Joe.

The second half moved much more smoothly and I found myself engrossed in the developing plot. At least, I was until a woman in the row behind me became quite unwell, clearly because she was drunk. Although not the company’s fault, I do think that it is the theatre’s responsibility to notice drunk and disruptive audience members. The experience made what had been an enjoyable evening turn unpleasant and, as I moved seats, I slightly lost track of the play’s narrative.

However, despite this, the end of the play was incredibly moving and the many twists left me guessing until the final minute. This is a play with some very funny moments and a big heart. Had I not been distracted in the final sections, I think that I would have shed a tear at the beautifully tender ending.