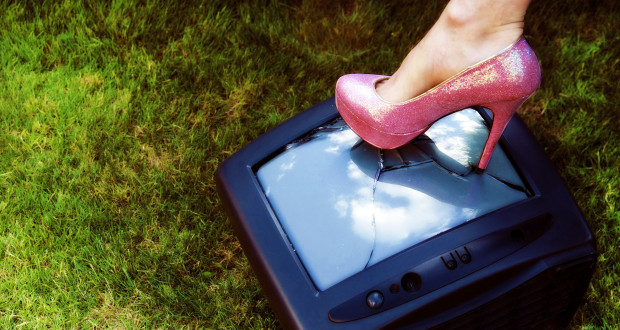 Pros: An interesting format; our poised host ensured moments of spontaneous hilarity throughout.

Pros: An interesting format; our poised host ensured moments of spontaneous hilarity throughout. Cons: The ideas in the text were a bit overlaboured. White Rabbit, Red Rabbit was part of the Not Television Festival, a post-Edinburgh weekend of theatre. The Chelsea Theatre that hosts the festival is, in a word, chaotic. When I arrived an afternoon tea dance was finishing up outside whilst an old-fashioned cabaret sing-song was in full swing in the foyer. From the kids running round to the old dears crooning along to Loch Lomond, and the trendy crowd that traipsed upstairs for the show, this&hellip;

An actor takes on a script they have never seen before - a fascinating idea but a bit heavy-handed in practice.

White Rabbit, Red Rabbit was part of the Not Television Festival, a post-Edinburgh weekend of theatre. The Chelsea Theatre that hosts the festival is, in a word, chaotic. When I arrived an afternoon tea dance was finishing up outside whilst an old-fashioned cabaret sing-song was in full swing in the foyer. From the kids running round to the old dears crooning along to Loch Lomond, and the trendy crowd that traipsed upstairs for the show, this theatre-cum-community centre certainly hosts a varied demographic. It’s great to see locals engaging with theatre but the building leans a bit too far to the non-theatrical activities side for me, and the performance space is almost incidental; the chaos downstairs does not exactly fill you with confidence for the show you have come to see.

Our host for the evening was drag queen Jonny Woo, who was glamorous, charming and funny. We felt in safe hands throughout. This despite Jonny Woo cold reading from a script she hadn’t seen before (since Jonny was performing as a woman, I’ll follow her lead and use female pronouns). It wasn’t just Jonny Woo taking a risk, we all were, not just because we were watching a play that was un-rehearsed and unpredictable but also because we were called on to participate in the action.

The set was minimalist: just a chair, a ladder and a small table with two glasses of water and a ‘vial of poison’ were onstage, our collective imagination creating the rest. The script was meta in style, constantly referring to itself as a written text. The play almost became a letter from the writer to both the audience and the actor performing it, a way to communicate with us. This is especially important, as the writer is currently unable to leave his home country of Iran and has no way of knowing how the performance will turn out, and how it will be received. His email is given out a few times, and we are asked to email him about the show, as if he is striving for some human connection. With the line ‘Would you save a seat for me? In the front row?’, we can’t help but feel a pang of sadness for his absence.

Although the writer was a clear presence in the play, some of the best moments were ones he couldn’t have planned. Jonny Woo is a confident and capable performer who provided a lot of humour, often unintentionally. As we work along with her to create the performance, there are bumps to smooth over and problems to figure out, and as Jonny Woo clarifies that an ad-libbed aside is ‘not in the text’, the ridiculousness of the situation becomes apparent – this was often a source of laughter.

The main problem isn’t the idea, which is brilliant, or the performance, which is equally impressive, but the text. There are some terrific elements to it. The White Rabbit Red Rabbit story that gives the play its title is wonderfully dark, but it is incredibly repetitive and some of the plotting is a little immature. The play ends with host Jonny Woo drinking from one of the glasses of water, which may or may not have ‘poison’ stirred into it and lying onstage as the audience filter out. As the audience are directly challenged to intervene, I was reminded of Neil Labute’s Coax in which a character asks an audience member to rescue the woman he is about to attack. The poison conundrum was also slightly reminiscent of Harry Potter. Either way, the idea is at least a decade out of date for my liking.