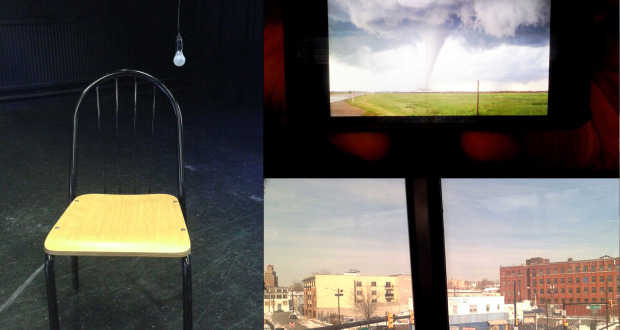 Pros: An innovative production with a heart-warming subject matter, performed with real feeling.

Pros: An innovative production with a heart-warming subject matter, performed with real feeling. Cons: The unusual audience dynamic might not be everyone’s cup of tea. Performed across two rooms within the Battersea Arts Centre, Solo Two is an emotive, one-man production about human relationships and communication. The show creatively addresses themes of personal connection, relationships, distance, friendship, love and forgiveness. In general, it taps into ideas around communication and how we relate to one another, both individually and on a global scale. Tassos Stevens leads all three acts and is supported by lighting operator Kieran Lucas. As a ‘solo’&hellip;

An honest yet unconventional look at human connections.

Performed across two rooms within the Battersea Arts Centre, Solo Two is an emotive, one-man production about human relationships and communication. The show creatively addresses themes of personal connection, relationships, distance, friendship, love and forgiveness. In general, it taps into ideas around communication and how we relate to one another, both individually and on a global scale.

Tassos Stevens leads all three acts and is supported by lighting operator Kieran Lucas. As a ‘solo’ performer, Stevens does a fantastic job of holding the audience’s attention from start to finish. In my opinion, he achieves this by combining a great script, a powerful delivery and a dynamic use of different mediums.

Moving against the convention of memorised lines and rehearsed characters, Stevens performs as himself and openly reads sections of dialogue from sheets of paper, distributed throughout the room. Far from being a lazy alternative to memorisation, this clever technique makes the piece feel very organic, as the audience is never sure what is coming next. The words themselves are beautifully written and Stevens delivers them from the heart. At times the dialogue is moving and poignant, at other moments it is down to earth and purposefully ‘real’. There are also a few laughs along the way, not to mention some amusing dance moves. All of this combines to create a incredibly pacey, energetic production.

Structurally, the show’s three acts are split between two different rooms. During act one, the audience sit facing one another in a circle, while Stevens performs form the centre and moves amongst the chairs. Light bulbs dangle from the ceiling at different heights and each illuminates independently in a pre-designed choreography.

Aside from the lighting, the production of this piece is simple but effective. In line with the pre-written sections of dialogue, the audience also hears pre-recorded speech from Stevens, contributes to the conversation themselves and even receives live contributions from people across the globe, via social media. I felt that this multi-media, ‘multi-voice’ approach not only helped to ground the abstract nature of the show but also brought to life its key themes around relationships and honest communication.

This production is unusual in that it asks the audience to create their own conversation. Traditional plays allow those watching to disappear into a darkened auditorium, forget the existence of the people beside them and become fully submerged in a fictional world. In the case of Solo Two, audience members are encouraged to speak up, communicate with the group and be listened to. Acts two and three even take place within a sitting room area, completely dispensing with the formal structure of a traditional performance space. While this may not be a comfortable experience for all theatregoers, I found that the group I was with fully embraced the interaction. Everyone was carthartically relaxed and friendly and a few even left having made a new friend, further deepening the impact of the play’s message.

Although the unconventional style of this production may not be to everyone’s taste, it will appeal to those with an interest in people, friendships and the dynamic which exists when two people relate. A theatre experience with a difference, Solo Two will leave you thinking about those who are important to you.