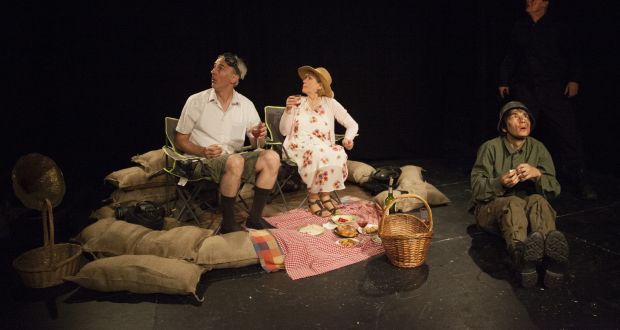 Pros: Two satires in one evening, the second of which will leave you giggling in your seat.

Cons: The first show left me with an uncomfortable feeling about whether or not we should ever laugh at war. Its absurdity did not resonate.
Picnic / Eastern Europeans for Dummies, Rosemary Branch Theatre – Review

Pros: Two satires in one evening, the second of which will leave you giggling in your seat.    Cons: The first show left me with an uncomfortable feeling about whether or not we should ever laugh at war. Its absurdity did not resonate.    Two shows for the price of one is not a bad deal. The Bridge are presenting two unique shows in one evening of entertainment at the Rosemary Branch Theatre; which is conveniently just an easy 20-minute walk from Angel Tube station. The evening started with Fernando Arrabal’s Picnic, set in a foxhole. Lloyd Heath plays&hellip;

A nice diversion to break up the working week if you’re in the area, and the second play of the two is definitely worth catching.

Two shows for the price of one is not a bad deal. The Bridge are presenting two unique shows in one evening of entertainment at the Rosemary Branch Theatre; which is conveniently just an easy 20-minute walk from Angel Tube station.

The evening started with Fernando Arrabal’s Picnic, set in a foxhole. Lloyd Heath plays the young soldier Zapo, who frightened and alone shoots blindly at his enemies while praying The Lord’s Prayer. His loneliness is soon dissipated by the rather random and absurd appearance of his father and mother.

Apparently they lived close enough to the front to enjoy a Sunday picnic with their son! Maxine Howard and Richard Ings play the wilfully oblivious Tepans who, if not wilfully oblivious, are at least blasé about the war happening around them.

Mr Tepan takes his son to task about his “score” for the week, and further trivialises the war by saying that modern warfare is devoid of “colour.” He laments the lack of horses and “true heroism.” Mrs Tepan, meanwhile, critically analyses her son’s cleanliness out on the battlefield, asking if he’s been keeping his ears clean.

Without a care they set up a picnic right in the foxhole and reminisce about small nothings that pale in the face of the conflict. The story gets stranger when one of the “Enemy” wanders into camp; Zepo.

Zepo (who ends up being a mirror image of Zapo), first demeaned by the Tepan’s is then invited to lunch. Towards the end shots fly as the battle whips up around the players in what turns out to be a very morbid ending to a rather flimsy satire. The play as a whole was awkward, and while there were a few chuckles they were more expressions of disbelief than genuine humour.

After a much needed fifteen minute break the second play took the stage: Eastern Europeans for Dummies: Is It About Sex Trafficking? This was more an exhibit than an actual play. Originally designed to be performed in a gallery, this is the brainchild of Dana Olarescu and Bojana Jankovic: Romanian and Serbian performers respectively.

Richard Cunningham provides the on-going voice over that explains how to identify the various “foreign species” of Eastern Europeans, or “EEs”. Everyone was invited to view the “exhibit,” which consisted of a plastic blanket-like tarp on which a table and chair sat. Tiny shots of some kind of red, slightly flat and tangy liquid were offered. It tasted like watered down cherry cough syrup. Drinking these offerings we were encouraged to walk around the exhibit only to discover a body sleeping rolled up in a blanket.

At last invited to sit down, the Cunningham instructional continued with how to identify Romanians. At this point the “Romanian” emerges from a trap door in the floor. Dressed in a red tracksuit with curlers in her hair she took us all in with something akin to a feral look.

This show was filled with hilarious fun-poking jokes and stereotypes that highlighted the xenophobic tendencies that exist within British society. The “exhibition” is well worth seeing, and it will definitely give you something to consider!

Eastern Europeans for Dummies made the entire night. Picnic on the other hand just did not resonate.  Poking fun at war is a difficult dramatic strategy to pull off. There must be a delicate balance lest the jokes become distasteful. The cast of Picnic did well, but the script was not hitting the right tones, at least for me. Overall Eastern Europeans for Dummies felt quite refreshing in contrast to the dark ending of Picnic.