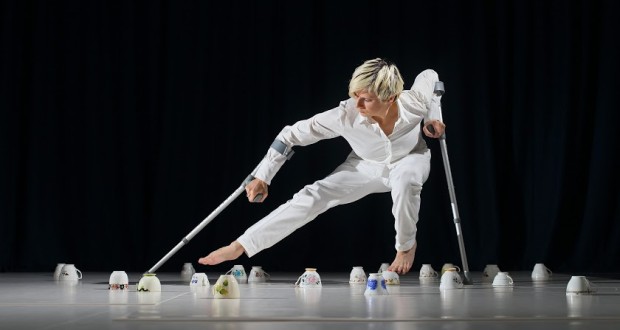 Cons: Finding the actual performance space can be confusing! Arrive early and be sure to ask for directions!
Guide Gods, Queen Elizabeth Hall, Southbank Centre – Review

Pros: Thought provoking and touching! Cons: Finding the actual performance space can be confusing! Arrive early and be sure to ask for directions! Did you grow up hearing “two things you never talk about are race and religion?” It also appears that disability has been added to the list of conversational taboos! However, in this heartwarming performance, all prohibitions are stripped away with respect, humor, and genuine candidness by performance artist Claire Cunningham. Guide Gods dives right into the conversation of how religion, or the lack there of, affects a person’s perspective on disability. The show tackles ideas like,&hellip;

A heartwarming and inclusive piece that expertly opens the door to start a discussion about disability and religion.

Did you grow up hearing “two things you never talk about are race and religion?” It also appears that disability has been added to the list of conversational taboos! However, in this heartwarming performance, all prohibitions are stripped away with respect, humor, and genuine candidness by performance artist Claire Cunningham.

Guide Gods dives right into the conversation of how religion, or the lack there of, affects a person’s perspective on disability. The show tackles ideas like, “God made me this way,” “I’m being punished for sins in my past life,” and “It’s just genetics”. Cunningham negotiates through these notions by way of tea.

Tea, she revealed, is the way to world peace. Every person she spoke with in preparation for her show offered her tea. She dryly revealed that she drank more tea during her research and interviews than she had in her whole life combined. And, as it turns out, Cunningham doesn’t really care for tea. Even so, tea was the bridge.

Through narration, interviews, dance, and conversations, Cunningham shares her experience with us. She herself doesn’t subscribe to any religion, but admits that she was raised as a Christian, and upbringing did have an affect on her perspective of disabilities, including her own. The view that being disabled meant she was broken was a view she rejected, but it led her to wonder how religion actually sees disability. Through her many conversations with Christians, Buddhists, Muslims, Hindus, and even atheists and agnostics, she has become more aware of the difference between the prejudices that come from a culture rather than a religion.

In between her conversation with the audience and the recorded interviews, she danced on her crutches. It was a beautiful, joyful, and even cathartic performance to witness. The many teacups, which she spreads out on the floor, are seen as fragile—yet there is strength. She demonstrates this by walking around on the cups themselves. It was a powerful image, at least for me, to see how something seemingly delicate—something that should be handled with care, can endure, overcome, and even defy expectations.

The performance was held an intimate space below the main Elizabeth Hall at the Southbank Centre. We all were asked to remove our shoes and get comfortable. There was an arch—the Arch of Crutches—that we entered through and a space that circled a white oval. On swaths of bright blue carpet were chairs, stools, and pillows. It was open seating, and we all had the choice to sit anywhere we liked. On the opposite side of the Arch of Crutches were three white steps leading up to a bookcase filled with religious paraphernalia: books, icons, statues, and teacups.

This performance was consciously created for people of all abilities. There was a sign-language interpreter as well as a captioner, who were there for those who were hard of hearing or deaf. And for those who were blind there was a narrator who explained the action on stage during the times when Cunningham wasn’t speaking. Derek Nisbet brought music and joy to our “congregation” by playing the harmonium, a droning cousin of the piano, and the violin.

Guide Gods challenged everyone to truly look at how they perceive disability and those who are disabled. Personally, it made me question the term “disability,” and whether it’s an accurate description. Like those teacups that Cunningham danced upon, people with disabilities are strong, intelligent, and capable of more than we might think possible. And this performance might also change your mind on how you view religion as well. This powerful performance is a must see!