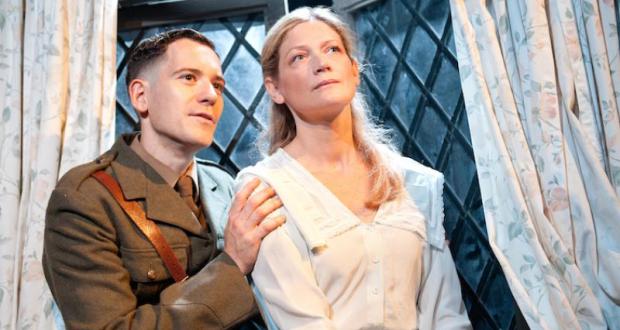 Pros: A thought-provoking storyline that engages and manages to stay amusing and entertaining despite the tragic facts on stage – great costumes too!

Cons: Perhaps a bit more pace on stage would have made this perfect.
Flowers of the Forest, Jermyn Street Theatre – Review

Pros: A thought-provoking storyline that engages and manages to stay amusing and entertaining despite the tragic facts on stage - great costumes too! Cons: Perhaps a bit more pace on stage would have made this perfect. Vintage play fans rejoice! Yet another newly resurrected script is being staged in the Capital: known for I am a Camera (1951), Goodbye to Berlin (1939), Cabaret (1966) and London Wall (1931), John Van Druten was a sensation back in the 1920s and 30s in the West End before he relocated to the USA. His controversial style gained him quite a lot of fame&hellip;

A very important work, resurrected just in time to remind us what we don’t want to happen again. Hugely moving and entertaining.

Vintage play fans rejoice! Yet another newly resurrected script is being staged in the Capital: known for I am a Camera (1951), Goodbye to Berlin (1939), Cabaret (1966) and London Wall (1931), John Van Druten was a sensation back in the 1920s and 30s in the West End before he relocated to the USA. His controversial style gained him quite a lot of fame at the time.

Flowers of the Forest was written in 1933, the year Hitler rose to power in Germany. Essentially a portrait of the devastating psychological consequences of wartime tragedies, what this play really tells us is that the memory of war is all too easily forgotten so that it can perpetuate itself. This play was so outrageous at the time that it was soon swept under the carpet by a world that was yet again on the brink of war and wanting no reminders of its atrocities.

The storyline is a Tarantino-style time jump, which is arguably an achievement in itself on a live theatre stage as small as the Jermyn’s. Sitting from the comfort of its cosy seats, we follow the ordeal of sisters Naomi (Sophie Ward) and Mercia (Debra Penny) whose mood changes from excitement and proud nationalism at the brink of war to fatigue, despair and resentment as tragedies unfold – only to be replaced by resignation, emotional numbness and sheer denial of the painful truth. The initial and final acts take place in the Jacklins’ living room in London, 1934. In between we are transported at the dawn of the Great War, 1914, to a Vicarage in the lovely Sussex countryside (Act II) where spirits are high and sherry pours in as the sisters’ fiancées Richard (Gabriel Vick) and Daniel (Thomas Lindsey) prepare to set off to France to wipe out the entire ‘evil population of Germany’.  Only two years later, in Act III, spirits are shifting as reality kicks in and war presents itself with its toll of death, famine and hatred that will ultimately take everyone’s dreams and aspirations away in the name of national duty. The two sisters will need 20 more years to lift the lid off their feelings and settle old scores (Act IV).

By taking a personal perspective from the feminine side, Van Druten breaks with the traditional heroic stance and exposes the untold side of war: a collective delusion by which old friends become soulless enemies and women put national pride before their own dreams, love and happiness. Victoria Johnstone’s design manages the shift between decades brilliantly and so do the actors. In fact, the entire cast is outstanding, with the two sisters Naomi and Mercia transitioning between decades effortlessly. Patrick Drury gives a strong performance as Reverend Huntbach, the restrained traditionalist who embraces the cause of the war in the name of God and the nation. Max Wilson’s Leonard – terminally ill with TB yet full of energy and dreams – is a joy to follow on stage and so are the other actors. Yet I can’t help but feeling that at times the stage is a tad static, especially in the middle acts. A bit more tempo would keep the pathos up!

However, this is a magnificent work and I warmly recommend it. Ardent and Jermyn Street Theatre are bringing this jewel back to life – just as the world seems to be in desperate need of a reminders of what wars are really made of.

Previous: What Is Future I?, Tea House Theatre – Review
Next: Win tickets to Altar Boyz! – Closed