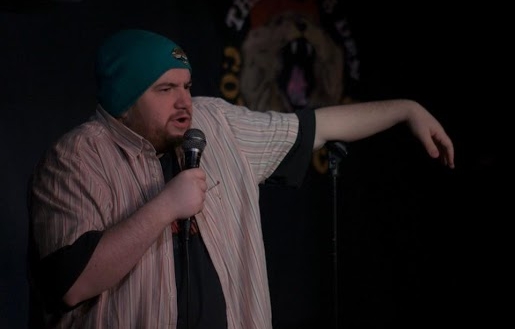 Pros: An affable and persistent performance on a range of subject matter from politics to every day occurrences with a few personalised tributes to the audience thrown in.

Pros: An affable and persistent performance on a range of subject matter from politics to every day occurrences with a few personalised tributes to the audience thrown in. Cons: An unexpectedly intimate crowd threw the performer (and the show) slightly off kilter. Stand ups don't have it easy. If you have a full room, there's the danger that the audience laughs at you rather than with you or there's the odd heckler. On the other hand, there’s the dreaded empty room. But what do you do when your audience is one friend that has a cameo in your show,&hellip;

A really strong stand up show in the making - a little more polish and confidence could take it a long way.

Stand ups don’t have it easy. If you have a full room, there’s the danger that the audience laughs at you rather than with you or there’s the odd heckler. On the other hand, there’s the dreaded empty room. But what do you do when your audience is one friend that has a cameo in your show, 1 photographer and 1 reviewer with her plus one? Richard Wright’s answer: ‘Give them their money’s worth’ (or their press tickets worth, as it were).

While Wright set out to prove that he was Full of Win with a fully scripted comedic set and a few props for good measure, he instead won through sheer persistence, determination, and a charming riff pieced together from his aforementioned script that got half thrown out the window and combined with a few tidbits from his Book of Win.

The show itself is perhaps one we have seen before in various incarnations: self-identified geek ironically celebrates his life through an arsenal of self-deprecating humour and shrewd observations on life, laced with what the rest of us would probably consider relatively nerdy analogies and metaphors.

However Wright managed to have us laughing throughout the show. He won us over with his endearing Ricky-Jervais-in-The Office style delivery, tenacity and willingness to laugh at – and wittily, in true shoot-from-the-hip style, use as material – the absurdity of his four person audience. The mere sprinkling of spectators did, obviously but not necessarily rightly, steal the focus of his act. The show must go on and it most certainly did, but not without a good deal of understandable initial nerves, fuss and angst which only made the worry of being just one quarter of the audience even more cringe-worthy. Once Wright realised no tomatoes would be thrown or no heckling would be hurled from the audience that really was rooting for him, the show carried on smooth-ish-ly.

Impressive was Wright’s ability to tailor his material to the audience by editing and cutting on the fly, going with what was working and doing some tailor-made material for an audience he probably got to know better than most. Wright does recognise that his material could indeed use a couple more punchlines (which was probably meant more as a material opener than an observation, but I’ll make the point here) and, as with most self-effacing humour, you can get a little bored of someone getting down on themselves for laughs. Wright does pull it around with a (probably ironic) self-affirming message for all: ‘everyone’s a winner no matter what anyone else says.’

While a little rough around the edges, all the elements are there to make a show that could really sing with just a bit of polish, calm and confidence. For pushing through in what is probably next to a comic’s worst nightmare and showing great promise, Richard Wright is definitely Full of Win.

Author: Richard Wright
This show was part of the Camden Fringe and finished on 30 July 2014.