Home » Opinions » Made In Dagenham… In London! – Sponsored 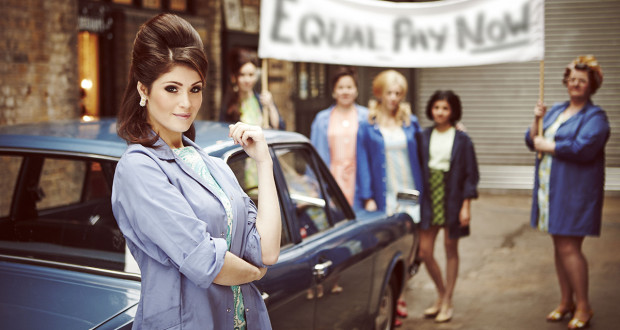 Credit: Made In Dagenham

Made In Dagenham… In London! – Sponsored

This world of West End musicals is a jungle. Competition for audiences is tougher than ever and it takes an extremely special show to stand out from the crowd. However, new show Made in Dagenham, starring screen starlet and former Bond-girl Gemma Arterton in the lead role of Rita O’Grady, looks set to take London stage by storm.

The hilarious musical comedy opens at the Adelphi Theatre on Wednesday 5 November, with previews beginning Thursday 9 October. In our opinion, this is a must-see.

The story of Made in Dagenham is simple. It’s Essex, 1968. Like millions of other working women, each morning Rita O’Grady is just trying to get her family moving and get to work at the factory on time. But her life is changed forever when it’s announced that the girls in the sewing room of Ford’s Dagenham car plant will have their pay grade dropped to ‘unskilled’.

Quickly drawing on a previously unknown inner-strength, Rita leads her friends in a battle against the might of Ford and the corrupt Union which was supposed to protect them. The girls’ inspiring journey gets bigger than anyone could have imagined, the pressure is too much for some, but can Rita keep up the fight and the happy home she’s worked so hard for?

Made in Dagenham has all the ingredients to be a colossal success. Funny, emotional and timeless, this brand new production shows how ordinary people can achieve extraordinary things when they stick together.

For more information and to book your tickets visit the Made in Dagenham website!