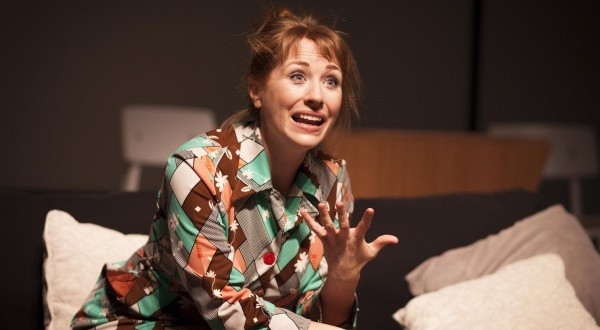 Pros: The play’s fast pace leaves you completely swept up in the engrossing storyline.

Cons: Some of the plot lines take a while to develop which doesn’t necessarily fit into the quick pace of the rest of the show.
Jezebel, Soho Theatre – Review

A very funny and farcical play which boasts of likeable characters and a big heart.

Despite my reservations about Jezebel’s subject matter, it is a brilliantly funny play about dating, relationships and love. The play centres around the relationship between Alan (Peter Daly) and Robin (Margaret McAuliffe), starting with the first time they met at a business meeting filled with increasing amounts of innuendoes slipped into their conversation. We then see snapshots of their relationship right up until a lull in their sex life a few months on. Alongside this we have an insight into Jezebel’s (Valerie O’Connor) somewhat disastrous love life – a guy breaking up with her from behind prison bars seems to be the icing on the cake.

Both stories are narrated by the characters not involved in that particular scene who make their observations from the side of the stage in a set-up that works remarkably well. The changes between scenes were very well done to, snappy but clear so you immediately know who the play is focusing on and who is narrating the scene.

With a minimal set many of the scene changes are shown purely through the way in which characters act and subtle changes in lighting. A one room set becomes a whole house as characters run around, opening and closing doors.  The clear scene changes and simple set design demonstrate the quality of the cast – all three were brilliant. Their character acting is in a farcical style, and despite the emphasis on humour I still felt that I knew all three deeply by the end of the show. The script is also incredibly fast paced and witty with rarely a dull moment, my only thought being that sometimes a point took a while to materialise even after I had realised what was happening.

Jezebel is a quick-witted farce that will leave you gasping for breath by the end of an evening of laughter-fuelled theatre. Very funny with characters you will take to your heart and ardently wish they reach a happy ending.