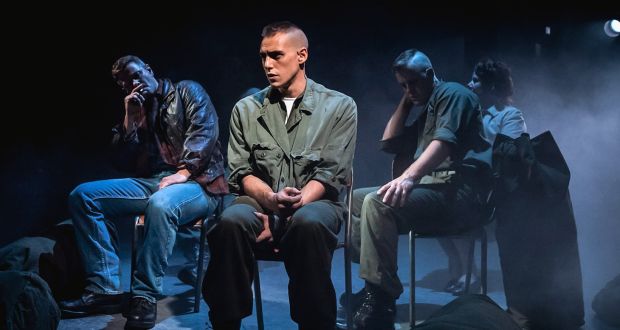 Pros: Great songs, and a strong story that deals skilfully with the human cost of war.

Pros: Great songs, and a strong story that deals skilfully with the human cost of war. Cons: A big show in a small theatre often denies the music space to breathe. Leafing through the programme, I noted that Sir Michael Caine is a patron of the Southwark Playhouse. My spirits immediately lifted at such an endorsement, although it should be no surprise that Sir Michael is a patron, growing up as he did just down the road in Elephant and Castle. Based on the 1991 film of the same name Dogfight also looked promising, as it garnered a handful&hellip;

A classic tale of young lives torn apart by a needless war with great songs to boot.

Leafing through the programme, I noted that Sir Michael Caine is a patron of the Southwark Playhouse. My spirits immediately lifted at such an endorsement, although it should be no surprise that Sir Michael is a patron, growing up as he did just down the road in Elephant and Castle. Based on the 1991 film of the same name Dogfight also looked promising, as it garnered a handful of awards when the show took its first bow off Broadway in 2012.

The story begins in 1967. Eddie Birdlace has just returned from Vietnam. He has a bruised body, and we suspect a bruised heart, but a sympathetic fellow drinker gets him to open up. We jump back to 1963; Kennedy rhetoric has sparked a wave of idealism and troops are moving into Vietnam. The story unfolds of three best friends – Birdlace, Boland and Bernstein; all sons of Marines who joined the Core to earn their place in history.

The ‘three bees’, as they are termed, complete their training and learn they are shipping out to Vietnam. Before embarking, they plan one last night out in San Francisco. Boland instigates the ‘dogfight’, a charmless wager based on who can date the ugliest girl. Determined to win the bet, he enlists the help of good time girl Marcy in return for a cut of his winnings. Bernstein on the other hand is more concerned with popping his cherry so he can enter Vietnam as a man and not a boy.

Meanwhile Birdlace drifts into a diner looking for a potential candidate. He meets Rose, the plump, awkward daughter of the diner’s owner. Rose has a passion for Bob Dylan, so Birdlace fakes an interest and inexplicably blags a date with her. How Birdlace thinks he could win the bet with Rose on his arm is beyond me. Sweet, pretty, affectionate Rose is adorable; the type of girl a guy could easily marry let alone ask out on a date.

Nevertheless, Birdlace and Rose join the other bees at a local nightclub along with their dates and the ‘contest’ begins. Birdlace’s feelings for Rose are slowly revealed as recriminations begin. They realise this night could be their last night ever on American soil; as they hit the road Birdlace does his best to forget Rose. The story ends where it began. But what happened to Boland and Bernstein? Will Birdlace find Rose, the love of his life?

The songs are well constructed and mould perfectly into the storyline. There are great rousing numbers like “We Three Bees” and “Some Kinda Time”. But Rose seems to have the best songs with “Nothing Short of Wonderful”, “Pretty Funny” and “Before it’s Over”, which are surely destined to become show tune classics. The choreography is bright and breezy but not overly complex; the script crackles with humour and the exchanges between Birdlace and Rose are a delight. The entire cast were pitch perfect and could not be faulted. Laura Jane Matthewson – appearing in her first London stage role – is excellent as Rose, as is James Muscato in the role of Birdlace.

The only downside for me was the venue. It just wasn’t suited to an expansive production like Dogfight. The sound quality varied considerably between numbers and the performance area was incredibly small. Cast members were continually walking round in circles to reach the next scene, which is far from ideal. Bulbs lining ropes suspended from the ceiling also made it feel like a circus tent. This show is crying out for a transfer to the West End where a large stage and full orchestra will do it true justice. This is high class musical theatre that deserves a longer run in front of a bigger audience.

Previous: Spoofing for Gordon, The Hen and Chickens Theatre – Review
Next: Ever After is an Awfully Long Time, The Phoenix Artist Club – Review